The 3rd edition of the CD is broken down into the following sections, each containing different categories of texts:

Introductory – A Good Place to Start 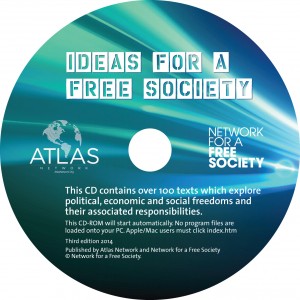 The Rule of Law

The first edition of the CD “Ideas for a Free Society”  was launched in early summer 2006 and 5000 copies were distributed through 5 pilot projects in Ghana, Kenya, India, Pakistan and Nigeria and in small amounts to other countries.  The edition was limited by the number of the copyrights purchased.

The second edition was released in late summer 2009 and this time 100,000 copyrights had been purchased.  There were only some small amendments to the texts on it but the format was greatly improved.

The third edition was published in July 2014. For this edition we decided to leave out any texts for which we would be required to purchase the copy rights, so that we could make as many copies as we liked and more importantly those who had copies could make further copies for their students or friends.  We did have to leave off a few excellent texts but there were others with which to replace them and many people were prepared to allow us to use their texts without paying copyright.  We made 50,000 copies and within a few months over 20,000 had been sent to partners in Africa and Asia.