Burundian student Aimable Manirakize was offered a place at a Student’s for Liberty event in Nairobi in 2015. There Linda Kavuka gave him a copy of the CD Ideas for a Free Society in French which for the first time in his life gave him access to classical liberal texts in his own language. When he returned home NFS funded the printing of many more of the CDs which Aimable said were crucial to their strategy to first build up Student’s for Liberty groups in Burundi and then in D.R.Congo and Rwanda. He said that ‘we can run events but without the CDs we cannot help others to be effective’ because the CDs were literally their only access to the texts that explore and explain the principles and foundations of a free society. Without them the students, Aimable included, had no means of studying these ideas further because there was no one in their countries who understood them or could teach them, they had a few books but perhaps in tens or the hundreds but certainly not the thousands needed and little if any access to the internet.

Foundations of a Free Society, by Eamonn Butler and published by the Institute of Economic Affairs, was the most used text on the CD because it was designed for those who had no previous understanding of these concepts and so covered all aspects of a free society in a simple way. Aimable immediately identified it as the text on which they should focus first and studied it in depth. He said that it equipped him with the knowledge needed to explain and defend the free market system on radio and television and helped them “enormously in our discussions with our target groups”.

They run an international essay competition annually with teams from all the SFL university groups in the three countries taking part and the questions come from Foundations of a Free Society which encourages the students to study it. About 1200 students are involved in this every year and get the CDs to enable them to study the book.

Aimable making the case for the market in D.R.Congo with the CDs to hand 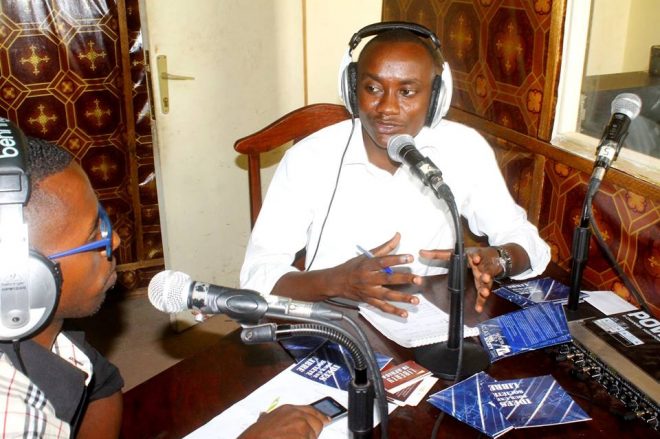 In 2018 Aimable founded a think tank in Burundi called the Center for Development and Enterprise: Great Lakes with the aim of promoting the ideas amongst other groups such as business people, journalists and politicians. Also to identify laws that were adversely affecting the environment for enterprise and they have had some good successes in getting them amended. Now in 2020 he is mentoring those who had been involved in SFL in Congo and Rwanda to start think tanks in these countries too.

Although they are full of initiative and energy themselves and enjoy the support of a number of organisations including Atlas Network the CDs have been central to their ability to understand and make the case for the free society which has been crucial to their success.

Students jostling enthusiastically to get a copy of the CD 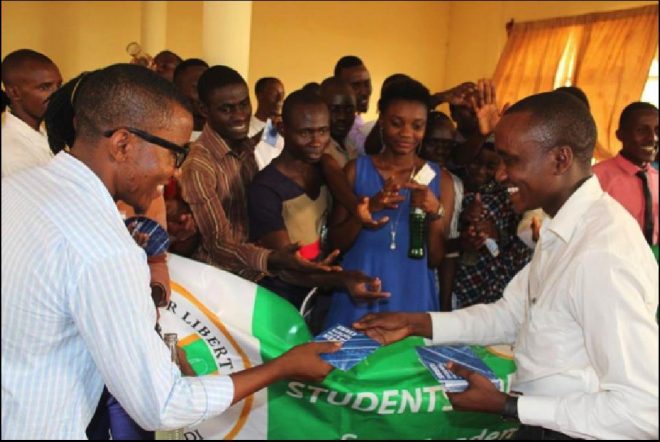 Aside from the fact that the CD led to the birth of student freedom groups, activists, think tanks, journalists and thousands of entrepreneurs today in the region, the CD helped me establish a team professionals who know the key words, convincing information in mobilizing public opinion in the Democratic Republic of Congo, Rwanda and Burundi on the understanding of a free society.” Aimable Manirakiza.