Our vision is of a world of opportunity and prosperity based on the foundations of individual freedom, limited government, the rule of law, the protection of private property, free markets and free speech.

Our mission is to make the texts and ideas which explore and explain the principles and values of a free society accessible in countries and languages where they are currently not available.

Our strategy is to increase the number of people who share our understanding of and commitment to liberty and will in their turn become the intellectuals who change the climate of opinion in their countries in favour of freedom.

We know that ideas have consequences and that many influential and inspirational advocates of a free society read just one book which had a profound impact on their understanding, leading them to dedicate their lives to the pursuit of the free society.

But unfortunately ideas that explain the relationships between individual freedom, limited government and prosperity are not available to most people in the world.  This is the case in much of Africa, Asia and the Middle East particularly if you don’t have access to fast download speeds.  For those who do not speak English or another European language, they are generally not available at all. 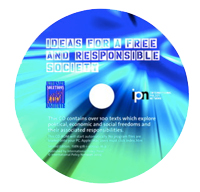 CD called Ideas for a Free Society. We support the translation of texts and production of CDs, DVDs and associated books in other languages. Also essay and other competitions about these ideas, and major outreach efforts by local partners in some of the least free and poorest parts of the world. In the hope that many more people can benefit from the creative power of freedom

A DVD has been launched in Portuguese, a CD and student primer in Kyrgyz, a CD in Turkish and Russian, another in Chinese with two hard copy books for students, plus a CD in French and one in Arabic. A number of these Arabic texts have now been published commercially in hard copy. We also have a Farsi translation programme which has resulted in texts that explain the principles of a free society being published in Iran

We originally focused on CDs because they are inexpensive to produce and distribute.  Likewise CDs provide access where the books are not available or download speeds are too slow or expensive.   The cost of producing the second edition of our CD Ideas for a Free Society was about 75 cents each and the average cost of shipping them 20 cents. So for under a dollar we can get over 100 of these wonderful texts on the CD to almost any country.

Progress far exceeded our expectations with the 100,000 copies of the 2009 2nd edition being exhausted by 2013. They were distributed by our partners to students in over 60 countries including Afghanistan, Pakistan, China, Egypt, Ethiopia, Georgia, Kyrgyzstan, Nepal, Sudan and Zimbabwe.

A 3rd edition was completed in 2014 and 21,000 copies immediately dispatched to partners eagerly awaiting them for their student outreaches.

More information about  the projects we support can be found on the individual country pages of the this website.