Burundi is 166th out of 190 in the World Bank Ease of Doing Business 2020 improving that ranking is high on the agenda of the Centre for Development & Enterprise: Burundi.  They are second to none in promoting a better understanding of the problems that beset would be entrepreneurs in so many African countries. and this year they excelled in their translation to French, publication and dissemination of An Introduction to Entrepreneurship.

First was a seminar launch event for journalists from 16 media outlets, then one with 25 representatives of students from the 10 main universities, the next attracted 57 members of Students for Liberty and a fourth for the Economic News Association in Burundi  brought together another 37 participants.  Everyone at these events are involved in spreading ideas and the book received a great deal of traditional and social media coverage.  16 listed media hits in the first weeks.

Radio debate about the book on CCIB FM 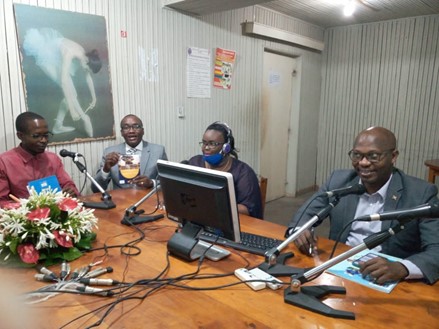 In March a workshop for 18 business leaders & staff of regulatory agencies, a conference for 511 students with a second that attracted 311 entrepreneurs and civil society actors.

Copies were given to libraries in Burundi and to Students for Liberty groups in Burundi, Rwanda and the Democratic Republic of Congo during retreats with local coordinators.  An article for op-eds and a Podcast allowed its promotion in other Francophone African countries reaching 17,273 people in 7 French speaking countries who accessed the book through the CDE site etc.

This is now being repeated for Introduction to Democracy while simultaneously the 6th Annual Burundi/Rwanda/DRC Inter Country Quiz takes place.  1200 first year university students learn about the Foundations of a Free Society, many become members for Students for Liberty and over time will promote freedom as the solution to poverty themselves.

The three think tanks in Burundi, Rwanda and DRC are now driving policy changes that improve the environment for enterprise in their countries.   CEO Aimable Manirakiza says that access to texts in French that explore and promote greater freedom have been crucial in getting these improvements including reducing the costs of registering a business in Burundi and allowing local registration of businesses in Rwanda rather than only in Kigali.