The CD was also the first access Aimable Manirakiza had to texts that covered the concept of a free society but this time in French.   In 2015 as a student activist desperate for a better life in Burundi he travelled for four days to get to a Students for Liberty event in Kenya which was to change his life.  He returned to Burundi with copies of the CD and a few books to start 8 chapters of SFL in Burundi that year and more in Rwanda and DL Congo the following year.  The CD was the only resource cheap enough to supply the relevant texts in large numbers and NFS has supplied thousands to them over the intervening 5 years.  Funding in addition translations, seminars, conferences and their flag ship annual International Quiz which involves around 1200 new students every year.

Two years ago Aimable passed his SFL commitments on and founded the Centre for Development and Enterprise: Great Lakes which we also support.

In 2020 NFS is funding two main projects for them plus the translation, publication and dissemination in French of 3 new books, and over 2000 CDs will be given away in 2020.

The first event is Freedom Week which takes place in late October in Bujumbura and will include a three day residential training for 30 selected young leaders from Burundi, Rwanda and the Democratic Republic of Congo on the fundamental principles of a free society. The facilitators will be University teachers Patrick Mardini CEO of the Lebanese Free Market Institute and Dr Hicham el Moussaoui a university lecturer from Morocco.

Also the Great Lakes Economic Summit 2020 for 250 participants from the region which will include a discussion of the position of Burundi in the World Bank’s Ease of Doing business and the Economic Freedom Index with international facilitators and a reform policy brief will be launched.  Third there will be a Liberty Seminar for 30 Journalists and bloggers from the region with at least 50 different media expected to attend the different events.

The second major event and separate from Freedom Week is the Annual International Team Quiz Contest which is now taking place for the 5th consecutive year involving around 50 different quiz events in 18 universities followed by national inter university quizzes and a national final during Freedom Week.  Around 1200  students will take part all of whom will study the book Foundations of a Free Society in detail because the questions will be based on it.

Group photo, with CDs of one of the early rounds of their 2020  international quiz 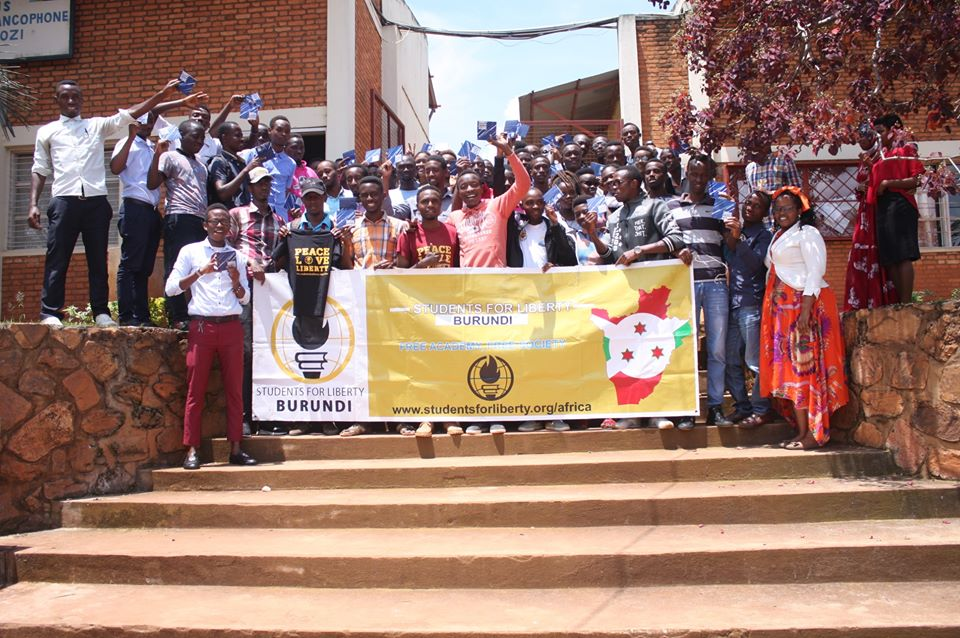 This year their quiz project was an SFL Event of the Year Award nominee as one of the most successful SFL programs in the world in terms of the number of students they educated about the concept of a free society which would not have been possible without the CD.