Association Multi chose An Introduction to Capitalism for translation into Bosnian and publication because “the book is ideal for the Bosnian public as it provides a clear understanding of the basic principles of capitalism.”

1000 copies have been published and Multi has created a partnership circle to work with them on distributing and promoting the books.

The IPI Academy distributes books produced by Multi to their students.  The Friedrich Naumann Foundation makes their own prints of the publications originally done by Multi and made 2000 copies of the previous book whose translation etc we funded and it is hoped this will also happen with An Introduction to Capitalism.   Dialogos.ba is a group of libertarians who will do translations for free so bringing down costs for Multi and a group of five sponsors buy a minimum of 100 books each time a new one is published which helps support the initial publishing.

An Economic Freedom Audit was done by Multi in Bosnia in 2019 and reported in November in Sarajevo. High level parliamentarians, economic advisers to the President and many leading economic professors were there.  Each received a copy of the books. Copies were donated to Libertarian ClubLibek in Serbia for graduates of their Academy of Liberal Politics and also to the Center for Business Affirmation in Zeneca and the Liberalni forum in Sarajevo.

Copies were given to the Book Club in Tuzla whose mission is to explore new books and ideas mostly with Social Studies students in Tuzla.  Book promotions were also made in many major cities in including Tuzla and Travnik.

The Economic Freedom Audit where everyone received a copy 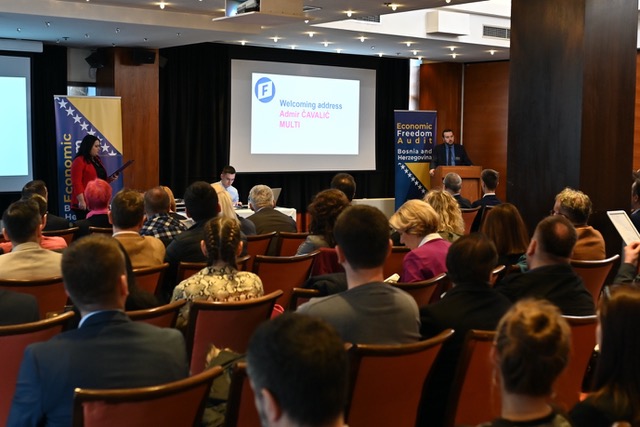 Posted in Bosnia and Herzegovina, Countries.