In summer 2018 the 2 day African Journalists for Opportunity training, a flag ship project of the Institute for Liberty and Policy Innovation, took place in Accra. ILAPI CEO Peter Bismark thinks it is an important function of journalists to ruffle feathers, ask hard questions, and demand answers and the purpose of the two day intensive training is to equip them with a basic understanding of how the economy works and the role that freedom plays in providing opportunities for enterprise and prosperity.

As a result they should be better able to hold those in authority to account and challenge any who promote more government as the solution to poverty.

Some of the speakers were there in person including Franklin Cudjoe CEO of Imani, a well established Ghanaian free market think tank which successfully holds politicians to account by applying cost benefit analysis to proposed policies. Franklin was one of the first people in Africa to use the NFS CD as a teaching resource and he took time to explain to the AJO journalists why they should read the texts on it and what they would learn from them.

Others made their presentations on line including Dr Steve Davies, Dr Tom Palmer and Dr Brian Baugus. 20 participants from Kenya, Ghana and Nigeria were accepted from 92 applicants. Others applied from Malawi, Zambia, Cameroon, Zimbabwe, Uganda, Sierra Leon, Liberia, Guinea, and South Africa but they could not afford the cost of travelling to it.

Peter Bismark discovered these ideas only because he picked up a CD ‘Ideas for a Free Society’ at a chance event he attended so he makes sure that all participants take one away for further inspiration.

Many of the journalists who attended are already putting some of the things they learned and discussed at the event into practise and the impacts keep multiplying because of the relevance and the kind of speakers that have attended. Both 2017 and 2018 participants have taken up initiatives in different capacities in Ghana and in other countries. Others have taken up and created a center at ILAPI (Center for Agro Liberty) to liberalize Ghana’s cocoa sector. Below are some participants who are achieving results via their works. 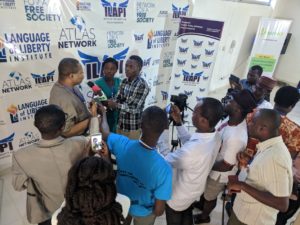 Efo is student journalist and prior to the AJO he had no idea on liberty. He had issues with campus policies but do not know how he address them until he applied for AJO when he saw it on a media platform.

Mathew Mensah is an author and provides trainings for young individuals in public speaking and a regular social commentator on Alpha Radio. He used the knowledge gained from AJO 2018, to expand his followers through the use of freedom in entrepreneurship to motivate students to take develop entrepreneurship mindset while in school. He also enrolled in the YAFO Ambassador Course for students and young professionals to learn the basic of liberty and its economic principles as well on Business Plan Development.

Ebenezer de-Gaulle is a professional journalist and a political morning show host who was taken aback of the ideas and knowledge he gained from the speakers. He confessed that until AJO he did not know much about public policy and governance except what he had been taught at school. He used to be a socialist but after the  AJO, he started to redefine his morning political program to explore the development line so he can present government to the people in a new way questioning policymakers (politicians) for economic upshot.