The Lebanese Institute for Market Studies   is a young and energetic think tank in the Middle East.    The project for which NFS gave them funding is called soukhor.com.  Souk Hor is an Arabic expression that means “free market” and the purpose of the project is to build the first Online Arabic Educational Free Market Platform.

It is primarily destined for staff and activists of political parties. They will be exposed to classical liberal ideas and free market economic policies on a wide array of topics. However any Arabic speaking intellectual, opinion leader, student or engaged citizen can use the platform to acquire a much needed knowledge in this part of the world.

Our objective is to prepare a new generation of Arabs capable of taking their countries in a laisser-faire direction.

Discussions about a market economy in Beirut 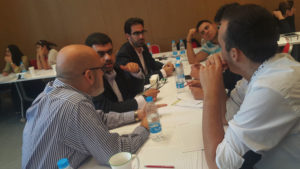