The White Movement is another organisation inspired by the work of AELSO and working closely with them and the Silk Road Radio.  They have around 10,000 members and organize events around the country. A major conference under the title of Youth and Government Conference was held in July with the participation of the Afghan President Mr Ashraf Ghani, with the aim of supporting and establishing good governance.

Human Rights club with the CDS 2017 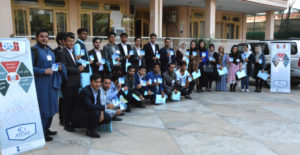 The Silk Road Radio Station with all its old and new radio programs is going well, the number of volunteer groups are increasing day by day and currently the station has 39 radio programs in 24 hours.   The mobile app for the station, which will have more functions and facilities for low internet connections in Afghanistan, is under development and will come into use shortly.