2017 is the first year we have funded projects in Indonesia but as it is the country with the largest Muslim population in the world we were keen to support the Centre for Indonesian Policy Studies (CIPS) and the Indonesia Institute in their work to promote civil, political and economic freedom as the only conditions which enable human flourishing.

The Centre for Indonesian Policy Studies (CIPS) held a three-day workshop with the topic “Liberty and Development” discussing human identities between globalization and religion, and how these give meaning to the ideas of progress and freedom in the Indonesian current setting. 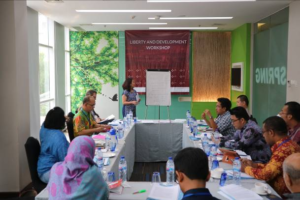 The workshop brought together 20 experts from the social sciences and humanities, such as several senior lecturers from universities across Indonesia, an economist from the central bank, the head of research and development from the Indonesia stock exchange, a politician and finance advisor in the United Nations Development Program, two co-founders of the libertarian website Suara Kebebasan, and several others which altogether led to a variety of perspectives in discussing the topics.

The debates provided many interesting insights into political processes that can be observed in contemporary Indonesia, ranging from gender inequality to Islamism. They brought the discussion that had started by asking about the meaning of individual freedom to a full circle.

Freedom needs to be aligned with cultural, spiritual and personal values. These values are grounded in religion and traditions, where the government has no mandate and ought to stay out. This creates a freedom from coercive constraint and broader access political and economic resources, which has become a powerful force of global change and meets considerable resistance, also in Indonesia.

Participants were inspired by the methodology, the discussions, and the opportunity to meet a diverse group of experts from other parts of the country and other walks of life. Their enthusiasm during discussions inspired CIPS to consider the conduct of similar events in the future.