The 2016 Rising Tide Foundation Essay Contest for African Undergraduates, was set up and managed by NFS and African Liberty Organisation for Development, ALOD, and won by Nigerian Linus Okechukwu Unah then in his last year as a journalism student.  His first prize was $1000 and a scholarship to the Liberty and Entrepreneurship Camp at St Paul’s University, Limuru, Kenya run by ALOD.

Linus had told us in 2016 that he had been excited about the ideas he heard at the camp and in particular the two films from the Acton Institute that were shown “The Call of the Entrepreneur” and “Poverty Cure”.

He had always hoped to go into journalism although not sure whether he was confident enough to go freelance but recently he said “I graduated a couple of weeks after I returned from camp in Limuru.  Got my degree and thanks in part to what we learnt in the camp began my journey as a freelance journalist.  If not for the camp and the award things would have been more difficult for me”. 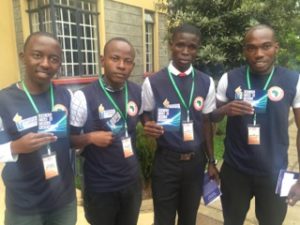 “Life as a freelance journalist has been, well amazing.  I travel a lot and do a lot of short flights around the country.  I visit the countryside and speak to people and share their fears and worries and get to write about all of what I have witnessed.”

He added that “the contest gave me the tools and also the skills to kick-start my career as an entrepreneur in the realms of journalism”.  The prize money bought the needed laptop and smart phone plus a little capital to set him up.

He then came to the Young African Scholars Colloquium that NFS ran in Nairobi in October. His reasons for coming were “..to further my understanding of how a modern society should operate and come to grips with the complex structure called the ‘state’.  In the end I want to propagate liberal ideas….to liberate others”.

Linus’ story demonstrates the potential for our strategy to inspire individuals with an understanding of how opportunity and human flourishing can develop in a free society and then supports them so that they can in turn promote the ideas amongst a much wider audience.