Mugabe John Socrates was introduced to us when he helped NFS promote the 2016 essay contest in Uganda which he did very enthusiastically and managed to make some new connections to students interested in learning more about liberty and also to sympathetic universities as a result.  Shortly afterwards he started the first Students for Liberty Group in Uganda with the help of sub Saharan SFL. NFS sent funding for CDs at that time and since supported some events.

128 took part in this conference on entrepreneurship in March 2017 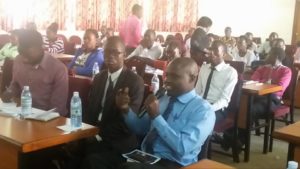 NFS was also able to introduce Mugabi to others in Uganda who shared his views and were able to help him, and to Brian Baugus a board member of NFS who has done Skype seminars for him and is preparing a course on entrepreneurship for those running think tanks in sub-Saharan Africa.

In addition when Dr Pythagoras Petratos was in Uganda he made presentations at other events which NFS supported. Dr Petratos spoke about the provision of health care in Africa and entrepreneurship. Also NFS opened some opportunities for Mugabi to speak and advice on presentations.

Speaking at the Great Lakes Conference on trade 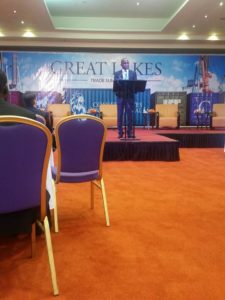 Mugabi is in the process of setting up Action for Liberty & Economic Development in Ghana. It will be a think tank that will popularize free market ideas and promote economic freedom. Also it will be setting up a network for scholars who explore and promote these concepts

NFS has given them a set up grant.