The Istanbul Network was founded in 2011 in Istanbul on the premise that Islam is not only compatible with liberalism, but is inherently liberal as demonstrated by the rich and pluralistic Islamic civilizations over centuries. It is dedicated to advance universal human values such as liberty, peace, tolerance, respect, integrity, and equality under the law among the world’s Muslim communities.

It is a truly international organisation which was run originally by the board and had just one international conference a year but late in 2016 Ali Salman became the CEO and it was registered in Malaysia. The hope is that now a number of innovative programs can be put in place to further its mission.

NFS has supported the annual conferences and other events. A significant product of those conferences is that in 2016 the book Islamic Foundations of a Free Society was published by the Institute of Economic Affairs.  It is co-edited by Dr Nouh el Harmouzi founder and CEO of the Arab Center and Linda Whetstone of Network for a Free Society and has already been or is being translated into Arabic, Dari, Turkish, Indonesia and French (often with support from NFS) and will be widely promoted in countries where these languages are spoken.

Ali Salman is the new CEO and the mission is to explore and promote the principles and values of a free society in the Muslim world. NFS has supported INFoL for a number of years and including this year for its registration in Malaysia, employment of a part time blog/IT manager and now a CEO.  It is hoped this will enable INFoL to raise more money and achieve its new business plan.

‘Islamic Foundations of a Free Society’

A full sound recording can be heard here.

On May 15th, 2017, The Henry Jackson Society welcomed Mohammed Amin MBE, Azhar Aslam and Sheikh Dr. Usama Hasan for an open discussion on their works on Islam and its compatibility with liberal and Western values. Mohammed Amin is the Chairman of the Conservative Muslim Forum, Azhar Aslam is a founding member of the Istanbul Network for Liberty and CEO of the NGO EO Vision21 Foundation and Sheikh Dr Usama Hasan, an ex-Mujahid, is the Head of Islamic Studies at Quilliam.

Mr Amin was first to take the floor, and he began by thoroughly defining a few key concepts relevant for the discussion. Firstly, he explained the differences between the Sunni and the Shia branches of Islam, before turning towards defining Islamism versus rationalism. In regards to the former, the differences are due to a theological and historic rift in regards to who should hold the title as First Caliph, the direct successor of the Prophet Muhammed. The latter was focused on a difference between traditionalism in Islam pitted against rationalism, in which, throughout history, the traditional faction won through. Rationalism in Islam, however, never disappeared. Lastly, the concept of Islamism was explained. This was invented by the Egyptian Hassan al-Banna and the Pakistani Abul A’la Madudi during the 1930s and 40s during the rise of fascism, an ideology that Islamism was built on, according to Mohammed Amin.

Mr Amin then went on to discuss the most important question, is Islamism compatible with a free thinking, liberal society. For him, it came down to how one views Islam, and how one understands the Quran. Very few Muslims agree or indeed adhere to the Islam put forward by Jihadi groups such as the Taliban or ISIS, but those who do are not schooled in the way of the Quran. They may read its scriptures, but not understand them, which is why they blindly follow an extreme interpretation. If they actually understood the meaning of the Quran, they would come to understand that it is all a matter of interpretation. The only reason the large majority of Muslims don’t speak out against Islamism is due to the fear of repercussion, or because they are afraid of being branded as “not good Muslims” or “not Muslim enough”. Mr Amin made clear reference to the fact that, Islam, depending on one’s interpretation, is indeed compatible with Western societies. As an example, he compared the holy book with article 18 of the UN charter of Human rights.

In his essay, No compulsion in religion, Dr Hasan makes various points in regards to Islam, free choice and extremism. During the discussion, the Sheikh listed up key points in regards to this. The most striking were: blasphemy has to be defined in a global context, and blasphemy laws are used by repressive governments to attack minorities; faith has to be based on free choice – liberty underpins religion due to the fact that God grants us free will; non-genuine religious practice, such as Islamism, is forced upon people by extremists; the Quran openly advocates open debate; in the Quran open thought, reflection and learning are key messages; in regards to criticism of Islam, the Quran advocates to “turn the other cheek”, to put in in Biblical terms. Something that in the Quran is termed “hold your hand”.

After some very informative and interesting comments by Sheikh Dr Hasan, it was Mr Aslam’s turn to take the reins of the discussion. He focused on liberal democracy’s compatibility with Islam, and reflected on the strong-points of his book. He firstly began by focusing his attention on the father of Liberalism, John Locke, and his philosophy’s dealings with Islam. Locke’s writings were heavily influenced by his teacher, and by his best friend, both of whom had strong links to Islam. Because of this, said Mr Aslam, many of liberalism’s ideas were actually taken or at least deeply influenced by Islam. Secondly he turned his focus to Sharia. These are laws, he said, that are meant at protecting the freedom of people. “Sharia preserves life, freedom and family” he continued, before pointing to the fact that Islam then indirectly gave rise to liberalism. Thirdly, Mr Aslam spoke of the nation state, and how these are incompatible with Islam. The rule of law, equality, accountability and free markets, however, which modern democratic nation states thrive off, are hard principles of the Quran. Yet another link to Liberalism and Islam.

The panellist finished off by giving his thoughts on the future of liberalism in Muslim countries, and how he believed this would only bear fruits without foreign/western intervention. It is up to Muslim countries to find their own path to liberal and democratic societies. 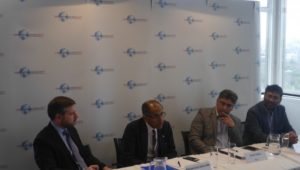