Students for Liberty Burundi was started in 2015 by Aimable Manirakiza who was first introduced to the concept of a free society at an SFL meeting in Kenya in May 2015 where he was given the French version of the CD “Ideas for a Free Society” in both English and French. Fellow members of SFL in Africa and the ideas on the CD inspired him and as a result he has since inspired thousands of students in Burundi, DR Congo and Rwanda with the CDs and the ideas on them.

Encouraged by this success he visited both DL Congo and Rwanda with some supporters and set up SFL groups in those countries leaving CDs with all who were interested and in 2017 they have both expanded the number of universities involved, visited them all once to tell them about the 2017 quiz contest.

In 2016 SFL Burundi ran an inter university quiz contest funded by NFS for about ten universities. The questions were based on two chapters of Foundations of a Free Society by Eamonn Butler published by the Institute of Economic Affairs. 681 students actually participated and potentially thousands more could hear about it on the radio. These were the universities involved and the numbers taking part at each of them.

SFL Burundi were so encouraged by this that they visited DL Congo and Rwanda and set up chapters in them. Then in 2017 they spent a few days at each university chapter discussing Foundations of a Free Society and running a quiz contest in each university on How to Eradicate the Barriers to Prosperity and Peace in our Region. 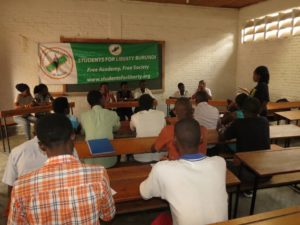 In total they spent fifteen days at four universities in different towns in DRC with 428 students taking part and five days at two in Rwanda with 53 taking part. In Burundi they ran the contest at 11 universities with 621 students in the different teams. There was in addition significant media coverage in Burundi, more limited coverage in Congo and unfortunately none in Rwanda because apparently it all has to be paid for there.

The questions are based on the Foundations of a Free Society where the rubrics of the questions revolve around the different texts that frame with the subject of competition such as free market economy, limited state, private property, Government must withdraw from the economy, state-run human services, What advantages result from the activity of circulation of money and goods, etc. Whenever there was an internal or inter-university competition, there were about a hundred questions on the general knowledge questions taken from the CDs with the various texts of Adam Smith, Hayek Friedrich, Bastiat Fréderic, etc. And general knowledge questions related to the benefits of ideas for a free society in order to eradicate the barriers of prosperity and peace in our region. Everyone gets their own mini library on CD in French with around 100 classical liberal texts on it.