The Afghanistan Economic and Legal Studies Organisation, AELSO   was set up in Kabul in 2009.  Its mission is to promote the values of economic freedom and responsibilities which includes strengthening the institutions of the free-market economy, such as clear definition of, and respect, for property, and promotion of freedom of expression, toleration, human rights, and civil peace.

We are proud to have worked with them since their inception.

Islamic Foundations of a Free Society, published by the IEA as been translated into the Dari Language and very thoroughly edited by the President of AELSO.  The cover has been designed and the hope is that it will be published in hard copy shortly.  In any case it will go up on the AELSO website and that of the Institute of Economic Affairs and the launch is expected on September 1st.   The English version of the book has already been discussed quite widely in seminars in Kabul and will be debated further afield when the translation and CD are available.

A CD called Thoughts for Peace and Prosperity has been published in June 2017 and two thousand copies produced. It contains over 100 books, articles, audio and video programs, Afghanistan national laws and human rights conventions with the object of education and promotion of free society values and its compatibility with Islam religion in Afghanistan.  The distribution to all public and private universities across the country started officially on 15 July 2017 and also to a number of youth groups. Some of the texts are in Dari, some Pashto, some in Farsi and some in English so they will be accessible by students in many neighbouring countries including Iran. 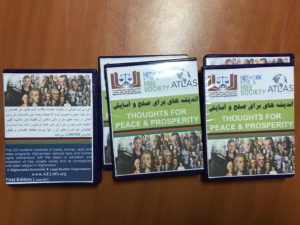 The CDs have really caught the attention of students and other young Afghans and much positive feedback has been received.

The Silk Road Radio Station with all its old and new radio programs is going well, the number of volunteer groups are increasing day by day and currently the station has 39 radio programs in 24 hours.   The mobile app for the Station which will have more functions and facilities for low internet connections in Afghanistan is under development and will come into use shortly.

The White Movement is another organisation inspired by the work of AELSO and working closely with them and the Silk Road Radio. They have around 10,000 members and organize events around the country. A major conference under the title of Youth and Government Conference was held in July with the participate of the Afghan President Mr Ashraf Ghani, with the aim of supporting and establishing good governance. 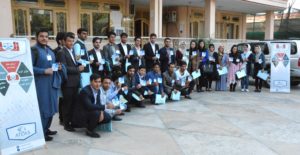