The Institute for Liberty and Policy Innovation (ILAPI), run by Peter Kwofie, is working to develop the African Journalists for Liberty (AJL) and started this year with an event in Ghana were more than 70% of the population listen to news everyday and there are 300 radio outlets as well as 4000 trained journalists in Ghana alone. We all rely on the media for our information and journalists in Africa tend to be parochial particularly where politics are concerned.

The objective of AJL is to assist and train journalists to shape public debate geared towards individual freedom and free market capitalism. 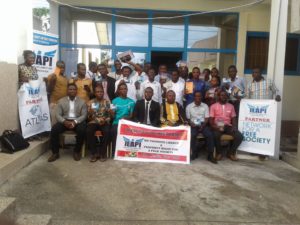 In May 2017 ILAPI ran “Diffusing Economic Freedom through Journalism, on 6th May 2017.  It was attended by 27 selected journalists from different media outlets in Ghana to educate them on the principles of liberty and economic freedom and explain how t hey can promote a free society through their content development. 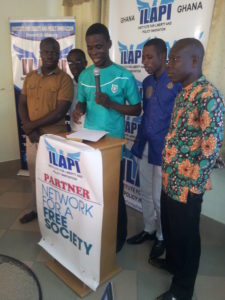 The Institute for Liberty and Policy Innovation (ILAPI-Ghana), a free market and an educational policy think tank has engaged journalists on the ideas of economic freedom, libertarianism, property rights, entrepreneurship and government accountability.

ILAPI-Ghana’s new project, African Journalist for Liberty (AJL), brought together 27 selected journalists from different media outlets in Ghana to educate them on the principles of liberty and economic freedom; this is to help them make use of such elements in their reportage on the theme: Diffusing Economic Freedom through Journalism, on 6th May 2017.  Journalists have little or no knowledge on economic freedom and how they can be used to promote a free society through their content development.

The Journalists for Liberty was launched by the Executive Director of ILAPI – Mr. Peter Bismark Kwofie, who set the mood, saying “Journalism, the fourth arm of government and the driving force of information, has the biggest role to play to ensuring free and fair distribution of wealth. Journalists must not attack government but to disarm and assist to constitutionally limit the government via information sharing for a free society… It is our responsibility to educate ourselves to liberally understand our mission on earth. It is in the light of this the Institute for Liberty and Policy Innovation is taking to launching this project: Journalists for Liberty to share information on the need to have freedom, individual liberty and its economic principles to make Africa and for that matter Ghana; to improve its economic freedom index and prosperity for it law abiding citizens.”

The eagerness of the journalist for knowledge was duly satisfied in the lecture that followed. The vice-president of ILAPI – Mr. Evans Badu Boampong echoed the effects of Bribery in the Media. According to the vice-president of ILAPI, media is a veritable tool for information dissemination, social mobilization and control. It serves as a mirror and a gate keeper in the society. However, bribery seems to be having a crippling effect on the African media. He concluded that, bribery in the media industry will mar the freedom of individuals, leading to a state of anarchy and further strengthen the state to do more evil; to avoid this, he advised journalist to examine the effect and purpose behind money received from individuals connected to reportage.

Prof. Brian Dwight Bugus, an economist, assistant professor of the regent university and a board member of the Network for a Free Society, joined in via Skype to speak on the “Need to Understand the Assumption of Governance.” He raised the concern that many people assume that government can solve all society’s problems. Just because a person is in office does not mean they have more or better information, are better decision makers or even understand the problem. We need to stop assuming that government has the answers or even understands the problems very well.

‘’It is imperative to question everything the government does because everything has cost, which is paid for with money taken from the people in the form of taxes or borrowing or printing the money; but politicians do not like to talk about costs they like to talk about the benefits of a project’’ Mr Peter Bismark Kwofie added when commenting on Mr Brians statements.

‘’Journalist should set the narrative – Journalists are the story-tellers of society, they define the national conversation. If a politician is a crook or a doing the right thing no one will know or care unless journalists tell the story. As a form of relieve, it is advisable for journalist to use humor – be respectful and polite and realize the role you play in helping bring open and honest government to your nation and prosperity and economic growth to the people’’ Mr Brian Dwight Said.

This left the journalist motivated to do right, by reporting on relevant issues that will keep Ghanaians informed about developments in governance.

The conference proceeded to its second session with a speech by Mr. Felix Yaw Adjei (Journalist and a research assistance of ILAPI), who spoke on “Developing Content of Economic Freedom on Political Morning Shows.” Mr. Adjei roused the interest of journalist gathered by asking; “If all the information we give out to our audience every morning is coming from newspapers, then how are we as media men, satisfying our other functions such as Educating the public, which is very important?”

These newspapers are dedicated to politics, they write about politicians, Morning Show hosts interview a lot of politicians as well and discuss their own issues. As a journalist, he enthusiastically motioned “It’s time to make the listener the pivot around which our presentation shall revolve and this can only be achieved when our presentation benefit them or our presentation places them at the centre of the information dissemination process. It’s time to do the education aspect of our function as journalists.”

The conference was then taken over by Mr. Daniel Mclauglin, an author and co-founder of Sierra Leone Liberty Group in Freetown, who cautioned journalist not to be a tool for Politicians. He was of the believe that basic economic knowledge will keep journalism grounded in reality and truth.

Dr. Daniel Mclaughlin said “An important function of journalists is to ruffle feathers, ask the hard questions, demand answers from those in power, causing them to be accountable to the people. Politics is power, justified as legitimate to enforce order in society; however power can be abused if the hard questions are not asked, because politicians rely on secret dealings and deceit to maintain power. Journalists can help bring about free society by shining light on bad actors in society’’

‘’Knowledge of basic economics is essential for responsible reporting because economic knowledge helps build immunity to political lies. Basic economics is however not difficult to understand’’ he said.

The conference then went on to its last session which was a workshop led by Miss Cynthia Kumah (Research Assistant), on the topic: Integrating Economic Freedom in Journalism. She pointed out some common measures of the 2016 of the Fraser Institute economic freedom index and how they reflect in various session of development.

Numerous studies have shown that countries with more economic freedom grow more rapidly and achieve higher levels of per-capita income than those that are less free.

The journalists were engaged in an interactive discussion where they examined situations in Ghana where they have recognized disregard for freedom. After which participants were awarded certificate for participation. They were put into groups to discuss topics on Trade, Security, rule of law and the legal system of Ghana. The best group was awarded books and souvenir and it was the most exciting part of the conference. One of the groups really showed understanding of the contents taught: The first group worked on Regulation of Credit, Labor, and Business and shared their ideas with all attendees present. They began by talking about the current ban on the production of Adonko Bitters. The group was of the view that consumers of Adonko Bitter should be held responsible for excessive consumption of the beverage instead of holding the company accountable.

Another issue was the case of TV3 workers who we dismissed after they make their grievances known to management. They went further to indicate that a lot of workers in Ghana are been paid below the daily minimum wage.

The second group worked on Rule of Law as a freedom index, they defined rule of law as the restriction of the arbitrary exercise of power by subordinating it to well defined and established laws.

Some of the occurrences that have threatened the rule of law in Ghana, the activities of Delta Force (a vigilante group) where they halted a court proceedings in the Kumasi Circuit Court and abetted 13 suspects to escape sentence.

Another case was the Montie 3 issue about three individuals who were incited in the public against the Supreme Court judges who had seat to rule on the bloated voters register case. The president however used his veto power ( discretionary powers) to free the convicted trio based on the constitutional instrument.

Also, if rule of law was really working, illegal mining would not have been an issue now. People engaged in illegal mining have not been made to face the law.

They recommended that, culprits who rise against the law must be punished through due processes according to the law.

On Freedom to Trade Internationally, the third group shade light on the major setbacks business men and women are often confronted with based on the;

The devalued cedis in Ghana have caused a lot of business men and women to change currencies to suit that of countries they are trading with. They, said ‘’government intervention still keeps the Cedis depreciating so the government should leave it alone’’ Another problem has been the language barrier, majority of Ghanaians who trade with Francophone countries are not abreast with French, hence making it difficult to trade effectively.

It has become difficult for trading activities to go on due to high taxation on commodities. As a result, a lot of Ghanaian businesses have resorted to smuggling goods thereby creating room for corruption.

Prior to the conference, participants (journalists) were to part take in an the Africa Journalist for Liberty Essay Competition (2017), out of the lot McAnthony Dagyenga, a freelance journalist of the Class Fm in Accra was crowned the winner of the competition, he was awarded a certificate from ILAPI, a customized website to promote Liberty, Economic Freedom, Property Right and Non-aggression Principles in addition to CDs on Ideas for a Free Society and a Scholarship to study a short course at the Ghana Institute of Journalism (GIJ).

At the end of the conference, all participants commended the initiative and were glad that ILAPI is investing in them. One participant, Mr. Oppong Kyekyeku of Radio One, said this was the first time he had participated in such an interactive and educative conference and the information gained will guide them in their reportage “ I have not heard of economic freedom or free market since I started my work as a media man. This conference has really opened my eyes on issues of understanding why politicians don’t talk about prosperity but usually talks and defend their political parties”. Another participant, Mr. Kofi Dion of Joy News also congratulated ILAPI on such an innovative initiative and indicated that though he had heard a lot about economic freedom but this were the first time he had had the chance to learn about its applicability to reporting on issues. ‘’ It seems the ILAPI team really understands why were work but still poor. Economic freedom have the potential to liberate us all but these politicians would understand it is the issue but I will engage them on my show and sensitize my colleagues to do same’’

The African Journalists for Liberty have come to stay to educate and inspire journalists to help spread liberty, property rights, economic freedom and entrepreneurship for a critical public discourse.