Congratulations to Gisele Dutheuil and the Audace Institute Afrique for their ground breaking work reinventing property rights in Cote D’Ivoire. April 2016. Almost all villagers in the Ivory Coast lack secure property rights. When people have no clear rights to use the land on which they live and work, they are unable to invest in their future. In the Ivory Coast (Côte d’Ivoire) only 4 percent of rural lands are registered, leaving villagers in vast areas of the country without secure property rights, and the complex registration process is cost-prohibitive for both them and the national government. A new rural land reform study by Atlas Network partner Audace Institut Afrique, titled “How to reinvent the rural land system in Ivory Coast,” explains how this problem can be alleviated through the use of informal land registries to establish property claims and decentralizing authority to the level of local village committees.

To Read the Acteur Communau’ TERRE an innovative rural land program in Cote D’Ivore click here and if you want to read a fuller report see this link  https://www.atlasnetwork.org/news/article/protecting-land-rights-through-local-registries-in-the-ivory-coast, to an article on the Atlas Networks website.

“Formalizing land rights transform the relationship between local government and state,” the study explains (translated from French). “Existing customary rights are replaced by a system that is often at odds with community realities.” 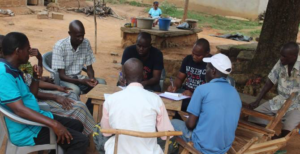 The needs and customs of local villagers can’t be adequately anticipated or managed from a central vantage point by the expensive process of Ivory Coast’s national government, and the costly land registration process now in place would take more than 100 years to document existing property rights. Devolving authority over land registration to the villages themselves would allow regulatory pluralism to flourish, with costs kept to a minimum. Local land mapping would better protect customary land usage, public areas, sacred groves, specially classified forests, and clear identification of boundaries in cases of prior rights conflict.

“The Ivorian law excludes the poorest of the property as long as the costs are higher and the procedures are complicated,” said Gisèle Dutheuil, director of Audace Institut Afrique and coauthor of the study. “The rural land problem in Ivory Coast is essentially linked to the bad governance because government likes keeping the best lands for its friends. Besides, when rural land is managed in an unclear way and in conflicts, it generates weak populations that can easily be dominated.”

Audace Institut Afrique presented its study at a conference attended by approximately 100 people, including members of the government, international organizations, researchers, university professors, entrepreneurs, and traditional chiefs and kings. Despite its critical stance toward current government practice, the paper was well received and the organization has been contacted by many organizations interested in furthering the project, including the World Bank.

The study has received significant media coverage, including nine national and international articles, two national radio presentations, and one appearance on BBC. Audace Institut Afrique is also beginning a four-year field work program in which the proposals in the study will be applied in select villages.

This is a bottom-up development model perfectly adapted to a fragile state in Africa while including the respect of customs and local traditions. The program allows the inclusion of African traditions in the requirements of globalization thanks to a huge technological leap. When talking about the value of ICTs in Africa, Acteur Communau’TERRE enables the judicious use of them.

All links below in French:

Read the full study, “How to reinvent the rural land system in Ivory Coast.”

Read “Côte d’Ivoire: Rural Land, a study reveals that 96% of land is not formalized and their formalization requires at least 100 years”.