The Network for a Free Society Iranian project was run by Bardia Garshasbi.

During 2016 three books translated by Bardia have been published in hard copy in Iran by Sargol Publishing.   Foundations of a Free Society by Eamonn Butler and originally published by the Institute of Economic Affairs in London and It is not a Zero Sum Game written by Manuel Ayau from the latest version published by  The Antigua Forum in Guatemala. Finally What is the Rule of Law by Leon Louw.  Apart from being available in hard copy they are widely advertised on Iranian websites including those of the government. They are all available here http://www.capto.org.uk/books.html

Bardia Garshasbi also edits an Iranian magazine called Excellent Organization. In the first 2016 edition there is an exclusive interview with Lord Norman Lamont, who was Chancellor of the Exchequer in John Major’s government. He shared his views on globalization, free trade, the British Iranian Chamber of Commerce, and Iran’s president, Dr. Rouhani. Other articles included are on free societies, income and wealth, the sharing economy plus a number of economic fallacies are answered.

The final edition, includes an interview, mostly on education, with Sir Anthony Seldon (in Farsi and English). An editorial essay in Farsi titled “Roots of State Education” inspired by a series of essays with the same title written by “George H Smith” and translations of  the Nature of Government – by Ayn Rand, an excerpt from What is the Rule of Law by Leon Louw and four more of Madsen Pirie’s economic fallacies.

The Farsi versions are available on here

Outputs and impacts. 3 books published in hard copy in Farsi and on many Iranian websites including those of the government; two editions of classical liberal magazine published.

NOT A ZERO SUM GAME – THE PARADOX OF EXCHANGE’

Not a Zero-Sum Game: The Paradox of Exchange is a fantastic little book written by the late Manuel F. Ayau, who passionately believed, and brilliantly argued, that in a market economy based on voluntar 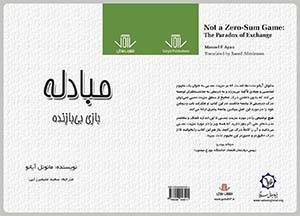 y exchange, people are constantly competing to make each other richer! As a result of this counterintuitive belife, Ayau boldly declares: “I had no idea that the Law of Exchange had so many surprising and counterintuitive implications. That is why I wrote this book.” He then dedicates his book to: “All the people in the world who – unknowingly and totally disinterested in my welfare – contribute through the division of labor, in infinite ways, to my and my family’s well-being.”. This book is now available to purchase in Iran. Download the first chapter of the book for free in PDF.

WHAT IS THE RULE OF LAW’ PUBLISHED IN TEHRAN May 2016. It is written by Leon Louw, translated by Bardia Garshasbi and published by Sargol Publications in Farsi.

What is The Rule of Law? is an inspiring paper written by the South African lawyer and founder of Free Market Foundation, Leon Louw. The paper, originally presented at the African Regional Mee 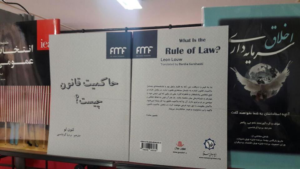 ting of the Mont Pelerin Society in 2007, is now translated and published in Iran as a book.

As the author explains: “The first objective of this paper is to define the rule of law in sufficiently unambiguous and concrete terms to be used as a practical aid in drafting, analyzing and Implementing laws; the second is to critique the tendency to use the term as a synonym for whatever anyone espouses.”

Leon starts the book with a wonderful quote from Nelson Mandela :- “The rule of law, as I (admittedly a long retired old lawyer) understand it, refers to a structural exercise of rule as opposed to the idiosyncratic will of kings and princes. Even where the latter may express itself benevolently the former is morally and politically superior. Where the rule of law does not apply, rulers assume entitlement to rule; the rule of law, on the other hand, places the emphasis upon structured responsibility and obligation”. Nelson Mandela. 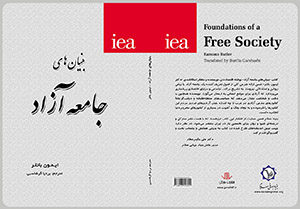 Foundations of a Free Society outlines the core principles that define a free society. As the author, Dr Eamonn Butler, explains: “Building a free society is no mean feat. The institutions of today’s (relatively) free societies have been built up over hundreds, even thousands, of years, and reflect the diverse history and culture of their populations. We cannot impose some blueprint on other societies and expect things to work out well. But by helping people to understand the foundation principles that make a free society able to function, we can at least give them the underpinning upon which they can grow their own – or indeed, keep their existing freedoms alive.”

You may buy the paper copy of this book in Iran or download part of it for free here.