The Institute for Liberty and Policy Innovation (ILAPI-GHANA) has helped to create Free market and entrepreneurial minded youths and students in Sierra Leone. Participants have been inspired to take up entrepreneurship to create business opportunities for themselves.  The theme for the maiden cross border conference is:

A country that fought a civil war for over 10 years and after peace deals signed and the United Nation (UN) helped rebels to be integrated into the society brought peace and stability to Sierra Leone. Over 50,000 people were killed in the war and two-third of the total population displaced. As they keeps picking up the pieces in building the economy to meet the previous economic friendly environment, a viral disease called Ebola cropped up and killed more people. The economy sunk, travel halted, domestic trade and transactions abhorred, public gathering made unlawful, transport systems are no more, and no schooling for all. How can the people of Sierra Leone make a living? There are high unemployment and an extreme poverty has enveloped the country but there is hope for all. The Ebola virus killed more than 4,000 people of Sierra Leone alone.

After a year of the country declared 100% ebola free by the World Health Organization (WHO), the Institute for Liberty and Policy Innovation (ILAPI-GHANA) took a bold step to help create economic freedom through the values of entrepreneurship and free market interventions. The Sierra Leone Liberty Group (SLLG) was there to bring this cross border project to a successful conclusion.

The president of ILAPI-GHANA Mr Peter Bismark Kwofie said, “… government should open and promote free market economy and create an entrepreneurial environment for the youths and students to start-up ventures as the government alone cannot provide jobs. Entrepreneurs are the driving force of the economy, and  must be given tax incentives and tax holidays for infant businesses to strive and create jobs to curb the menace”. Besides, the listening government of Sierra Leone should hear the plights of its youths and create the necessary avenues for its people.

Mr Kwofie said. He further emphasized on free trade within Africa and a much more borderless states.  In Sierra Leone, about 40% of the people are underemployed, 15% with well paid salaries especially those in politics and 45% unemployed. Education is not encouraging but the government is politically doing its best to revive the system. Liberty and freedom for all to mutually exchange goods and services would help to trade. The people of Sierra Leone are friendly and living in harmony. The economy of the country can move at a faster pace if the government embrace economic freedom, individual liberty and the non-aggression principles to boost entrepreneurship. A free society create freedom and as such, such principles of a free society ought to be embraced to pave way for all to exhibit their natural prowess. Liberty and economic freedom affect every aspect of the individual’s life.

Standing room only at the ILAPI-Ghana and Sierra Leone Liberty Group meeting in Freetown, Nov16 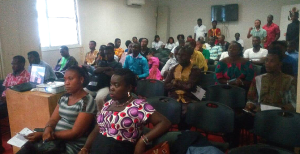 Mr kwofie also said, “the government of Sierra Leone needs a youth entrepreneurship policy geared towards free market, property rights and constitutionally limited government. All Youths Policies across Africa do not have effect on the mass youth per countries. Trade grows the economy only when there are sound policies without protectionism and limited government interpositions“. 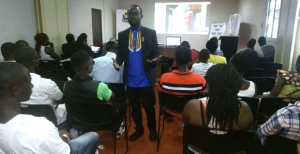 Mr Kwofie provoked the participants to go into entrepreneurship to identify problems, solve and make money out of them ” …entrepreneurship goes beyond buy and sell. Is about being industrious and being a risk taker with passion and a driving force”.

The SLLG director, Mustapha Cole, spoke on digital currencies such the Bitcoin. Mr Kwofie also expounded the blockchain and the ethereum platform as a way of disarming government. Bitcoin is a virtual currency used in all transaction and is peer to peer without a third party. Mr kwofie and Mustapha Cole are Bitcoin users and asked all to explore and participants to use them for less and no transaction charges. Mr kwofie stated few platforms such as the Xcoin, Bitholla, Cryptotrust, Bitclub and Bitland as some of the good investment platforms. 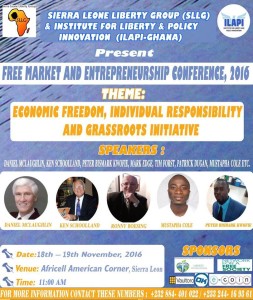 There were 72 participants for the two days conference of diverse field of study. The programs manager of ILAPI-GHANA, Ms Akosua Fosua Offei lectured on Women Empowerment in the Libertarian Way. She said,”… women should not be forced to sacrifice their lives and properties for others but be left free by government to deal with one another as free traders. A free and a competitive market enable women to allocate resources and equally prosper as men or more than them. The only economic role of government is to protect property right, adjudicate disputes and provide legal framework to protect individual interest”.  She asked ladies present, to form organizations to champion free trade because women trade more than men. She also said women are the architect of the society and must stand for freedom against individual liberty.

Mr Kamara, a graduate unemployed said, “I have really learnt new things from these Ghanaians. I never knew of free market until today that it creates wealth than any other intervention” another student also stated, Mr peter has really inspired me with his presentation that, is not the number of years you spend in school  that makes one prosper. I must give to the government and not the other way round”. Another participant Aminata said, we really need freedom to work. we have been conditioned that government would solve our problems so we often cry to them. Now I know and will help spread free market here in Sierra Leone. Mr peter is really good and I hope to have him again.  A lady participant, Anisa Adama also said, Mr peter told us this and I was so much happy to know that, the school system only prepares us to seek jobs and not to create one. 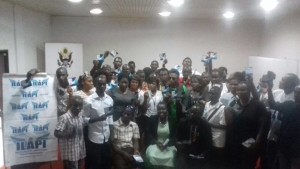 Participants were not aware of that economic freedom, protection of private property right and individualism solve problems. Free speech should be encouraged in our African democracy. The event is an eye opener for all and hoping to help boost the economy of a once Ebola stricken country.

NFS supported this meeting and also the provision of the mini library of classical liberal texts on CD “Ideas for a Free Society”. 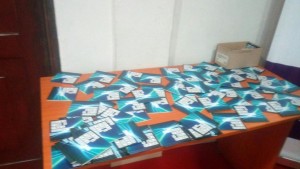