Peter Yakobe was an undergraduate in Malawi when American academic Brian Baugus came to lecture and inspired him with ideas about free societies. Brian introduced him to Japheth Omojuwa of AfricanLiberty.org who had learned about the ideas himself when he was successful in the AfricanLiberty.org essay contest which NFS has supported for many years. Peter then began reading the books of Hayek, Tom Palmer and Adam Smith some on the CD ‘Ideas for a Free Society’   He took part in a four month training with Students for Liberty during which time he inspired two Zambian students to start an SFL branch in Zambia.

In 2014 he co-founded the Centre for Free Market Enterprise with Pilirani Banda and is already energetically undertaking student outreach.

They run free market roundtable sessions, liberty workshops and workshops on entrepreneurship including in the local prison for those about to be released. Also distributing books and CDs and their   major event to date, with NFS support, was an inter varsity debating contest with topics such as “Can Malawi do without donor aid?”

An excited packed house at the finals 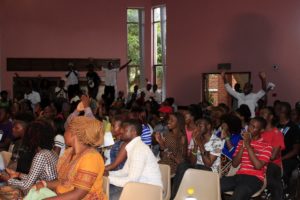 1,652 students took part in total and it was featured on the media 91 times. 1000 students received the Tom Palmer/Atlas Network book ‘Why Liberty’, all took away the CD ‘Ideas for a Free Society’ and 2000 further CDs were taken up by other students at the universities.

Malawi Broadcasting Corporation was so impressed with the debate that they invited a live replay of the finals at their studios the following day and their audience is potentially 12,000.

The live replay of the CFME debate on Malawi television 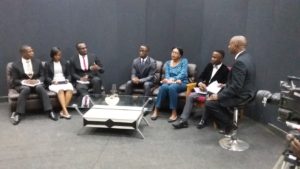