In October 2016 African Students for Liberty hosted their first ever event in Uganda at the Nkumba University, Kampala and there were 93 participants representing 7 universities and 3 colleges. The purpose of the event was to teach ideas of liberty and to officially launch Students for Liberty Uganda. Participants were given copies of the books Voices from Africa and Why Liberty during the event as well as copies of the mini library of classical liberal texts on CD.

A number of people were involved in this start up which had taken many months to plan. Mugabi John Socrates now heads SFLU and has already arranged an essay contest and number of other events.

Students from across various universities have since participated in the inter university seminar at Kisubi University under the theme ‘Why Entrepreneurship is Vital for a Free Society’.   This seminar was also the venue for rewarding the two students wrote the best essay concerning the Effects of Government Controls.  The fourth year student of telecom engineering from Makerere, Bwambale Viviany, won 50$ for the best essay followed by Orach Francis from Kisubi University who was the second prize winner.   Prof Mary Chowenhill, Prof Dwight Brian Serubiri Uhuru (entreprenuer) and the dean of students of Kisubi University Prof Nambi Sara presented papers explaining the advantages of a free society.

Also on 17th December SFLU held a Leaders for Liberty meeting at Nkumba University in Entebbe which was attended by 12 Ugandan Students for Liberty Chapters many of whom applied for the online local coordinator training program.

Reception table at SFLU Leaders for Liberty event with CDs and books ready for the students leaders. December 2016 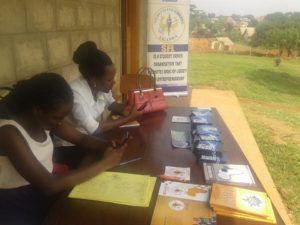 In addition to forming SFLU Mugabi John has teamed up with Dr Lubowa Martin to found a policy and research based think tank in Uganda. It will be called  Action for Liberty and Economic Development or ALED.

Our organisation we be called Action for Liberty and Economic development(ALED).We are going to register it soon as policy and research based think tank in free market and libertarianism.We are sharing expirience and guidance from Bismark Kojo of ILIAPI Ghana. 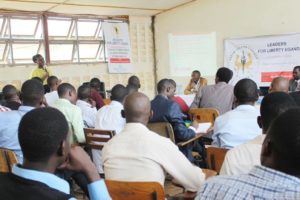 Dr Lubowa Martin has a Phd in entreprenuership and is the dean of the School of Entreprenuership Bugema University.   Mugabi John is a student of political economy, Nkumba University, former ALod representative in Uganda and Director of Students for Liberty, Uganda.