The Arab Center in Rabat Morocco  undertakes translations, publications and runs many events throughout the MENA region. NFS has supported their work for the years 2013 – 2016

During 2016 they held their 13th summer school titled:  “Five years after the Arab Upheavals: Stakes and Challenges” in Hammamat in Tunisia (22-27 August 2016). There were 7 speakers from Jordan, Egypt, Morocco, Tunisia, Kuwait and 35 selected participants: 14 from Tunisia, 4 from Libya, Algeria and Egypt, 3 fro Yemen, 2 from Jordan and 1 each from Morocco, Bahrein, Lebanon and Mauritania.

In December they held a number of consecutive events including the Averroes Academy where 18 – 20 young civil society activists took part in a workshop to equip them with the skills needed to write concise policy papers to promote private and market driven initiatives in their countries.

There are now have over 80 classical liberal texts translated into Arabic on their website, many of which were funded by NFS. Once they have been translated it seems they become attractive to commercial publishers in the Arab world. In 2016 Foundations of a Free Society by Eamonn Butler and first published by the Institute of Economic Affairs in London was commercially published in Arabic. Also Economic Freedom and Development first published by the Center for Independent Studies in Sydney and written by Wolfgang Kasper.

Foundations of a Free Society, written by Eamon Butler, published in the UK by the Institute of Economic Affairs and in Morocco by the Arab Centre

It can be downloaded here in Arabic. 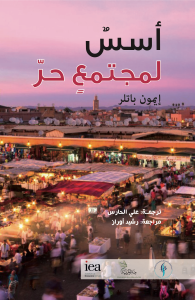