Students for Liberty Tanzania and the Uhuru Initiative (UIPE) jointly organised an inaugural one day seminar for SFL Tanzanai on November 5th 2016 with support from Students for Liberty, Atlas and Network for a Free Society.  Evancy Nkya of SFL managed it very effectively.  The purpose was to increase the numbers of young people with an under standing of, and interest in the philosophy of liberty and the importance of liberty to entrepreneurship so they then can promote it themselves.  Speakers from SFL and other think tanks covered these topics and there was a short presentation on the World Bank Ease of Doing Business in Tanzania comparing it to the performance of Hong Kong. To give the students get an idea of the difficulties faced by entrepreneurs in their country as compared to many in the rest of the world but a power outage resulted in Evans giving the presentation instead.

There were 107 people at the event which was a full house and since then and partly as a result of this meeting SFL Tanzania have held meetings at other universities to set up SFL chapters there too.

Outputs and impacts. 107 students at the first event and approx 1000 CDs will be given to Tanzanian students during that and subsequent events.

Registering for first ever Students for Liberty meeting in Tanzania, Nov16 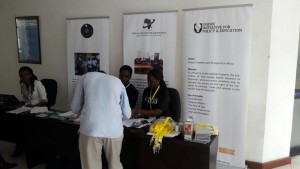 Full house for first ever Students for Liberty meeting in Tanzania, Nov16 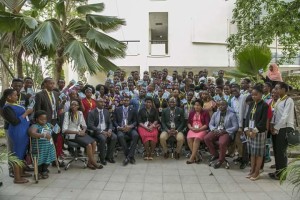