Freedom and entrepreneurship are much needed in Ethiopia and TEAM (Teaching of Entrepreneurship on Anti Poverty Movement) is focussed on promoting understanding of them .

In the photo in September 2016 you can see their Chairperson, and student leaders who met and discussed about the road for a prosperous society. The meeting was sponsored by Network for a Free Society and the Amharic edition of the Foundations for a Free Society was available for participants.  This book was written by Eamonn Butler, published by the Institute of Economic Affairs and is available for free download on its website including the Amharic version. 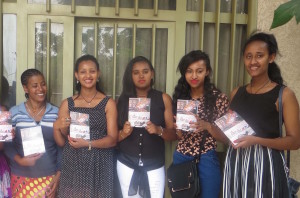 Kidus Mehalu, who runs MEET in Ethiopia and Bambi Bekit who runs the Students for Liberty Group in Kenya that works with Amharic speaking migrants from countries such as Eritrea arranged a  .

The purpose was to introduce the participants to the idea of a free society and they were each given the mini library of classical liberal texts on a CD in English. More importantly they were also given a hard copy of one of the texts on the CD “Foundations of a Free Society” that has been translated into Amharic by Kidus.

The hope is that some of these books will be taken into countries such as Eritrea, which is one of the most closed nations on earth where Amharic is spoken. It is also the nation that is bottom of the World Bank Ease of Doing business index.