Association “Multi” in the last month, organized three events with the participation of over 700 students. We had an innovative STEPS Conference (flagship event), “Night of Ideas” debate competition in Zenica and the Free Market Road Show (for the first time in Tuzla). http://multi.ba/

Then October 27th, 28th and 29th will see the first Libertarian Festival ever in the Balkans.

STEPS conference was organized in the great hall of BKC Tuzla and was attended by about 500 students. Speakers had exactly 18 minutes to tell the most interesting story of their life, inspired by liberty and entrepreneurship. Each speech was recorded by the local television and will be broadcasted as a weekly program (after which it will be placed on the televisions YouTube channel). A total of eight speakers spoke on entrepreneurship, youth activism, liberty and art, the importance of volunteering and the basics of liberalism. During STEPS conference we organized mini event promoting liberal economic reforms in Bosnia and Herzegovina through the so-called. “Reform agenda”.

At “Night of Ideas” debate competition, supported by NFS. There was six teams that competed in front of audience of 100 participants. The teams debated on the topic of youth unemployment, economic reforms and the general economic situation in Bosnia and Herzegovina. Winners won EU trip and will have the chance to debate on the Liberty festivale in Sarajevo. 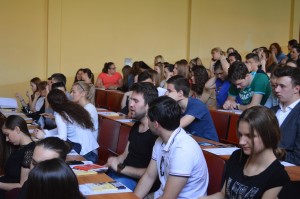 Free Market Road Show was held for the first time in Tuzla (left-wing stronghold) at the Faculty of Economics, University of Tuzla in front of 100 students. On FMRS we talked about the importance of economic freedom, trends in the shared economy, and the importance of freedom of speech (in the context of political correctness). Tuzla will from now on be the traditional host of FMRS event.

During our events, participants were given hundreds of “Economics of Freedom” books, gift cards for “The Essential HAYEK” book that we are printing right now, and “Ideas For Free Society” CDs. We had huge media coverage for all three events. The first results are already visible, because we never had more volounterus in “Multi” with desire to participate in the biggest movement to promote the ideas of ​​liberty in Bosnia and Herzegovina.

Posted in Bosnia and Herzegovina, Countries.