Glenn Cripe from Langauge of Liberty journeyed to Brazil in late May 2014, to Liberty Seminars in Porto Alegre, Pelotas, Rio Grande, Santa Maria, and Curitiba, organized by Gabriela Bratz Lamb and several campus coordinators for Brazilian Students for Liberty (EPL).

Founders of Language of Liberty Glenn Cripe and Andy Eynschen travel to every corner of the world promoting liberty at camps run by local groups such as think tanks or student groups. They always have the mini library on CD “Ideas for a Free Society” with them to be sure that every student can access the many wonderful and inspiring texts that have been written on this subject.

Below is a vivid report of the Brazilian trip written by Mart van der Leer from Holland who joined the Language of Liberty team in Brazil.

On Tuesday morning our Liberty Team left the city of Porto Alegre, capital of Rio Grande do Sul, the southernmost state in Brazil. After a 5-hour bus ride we arrived in the city of Rio Grande, one of the country’s busiest maritime ports. For our wonderful hosts’ group Clube Atlântico, founded about 6 months ago, it was the first time they received international guests. Nonetheless, thanks especially to the efforts of Camilla, Eduardo, Heber and Everson we felt so welcome and comfortable it was like meeting old friends!

In a city known for its strong unions related to the port and city, the group has encountered aggressive opposition from left-leaning (student) groups. Though such groups apparently don’t shy away from vandalizing property in order to make a point, the Liberty Seminar was not interrupted by a confrontation. After a word of welcome from Clube Atlântico’s president Henrique, Glenn introduced the Language of Liberty Institute to the audience followed by Patrick’s empowering speech about educational alternatives and home schooling, and a talk on marketing liberty by Mart.

After the break the attendees were treated to an eloquent presentation by CATO’s Latin America expert Juan Carlos Hidalgo on how economic freedom leads to economic growth and betters people’s lives. The 35 students that attended the seminar, hailing from all over Brazil, left feeling encouraged and inspired to redouble their efforts for the cause of liberty. During the post-event dinner with our new friends we were told that the event had also attracted new members to the group.

Encountering the sort of opposition we saw in Rio Grande was a new experience even after organizing over 40 programs all over the world, including many former Soviet countries. Still, it is easy to see the amazing opportunity in the city considering the port and the university that attracts students from all over the country. In this hostile environment communicating the message of liberty effectively will be especially important, but if it succeeds the city and its people face a very bright future.

The next day we continued our Liberty Tour and went on our way to Pelotas a little farther inland. The local EPL (Estudantes Pela Liberdade) chapter Clube Austral, founded late last summer, hosted us in the Mercosul lecture room of their university. The event was followed by a dinner at a restaurant called Cruz de Malta, reminding us of our most recent trip with the Language of Liberty Institute.

Early Thursday morning we got on the bus for a long trip through the country en route to Santa Maria – the site of the tragedy at club KISS when a fire cost over 200 young people their lives. Eighteen months later the building is still boarded up, with pictures of students and flowers on the sidewalk reminding everyone of what happened that night. If anything good can be said to come out of such a tragic event, the students and locals bonded and found a lot of support with one another. The local government, however, has made safety requirements so onerous as to prevent any other clubs from continuing or opening up business since, in a city full of young people looking for entertainment. 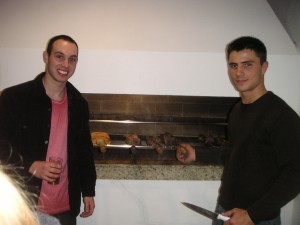 Presenting the empowering and uplifting message of liberty against such a backdrop felt all the more like a blessing. We were joined by Helio Beltrão, founder of Mises Brazil, who gave us his perspective on net neutrality and other current issues in Brazil. The typical Brazilian churrasco (barbeque) hosted by the local group Clube Farroupilha (lighthouse), which has already attracted more than 100 members in only six months, concluded an inspiring and fun evening.

The billions of taxpayer dollars that went into soccer stadiums and infrastructure in remote areas for the upcoming World Cup seem to have spiked skepticism of government policy among Brazilians. It seems that now is a good time for people like our new friends to seize the moment and show people why liberty is the way. The timing for the Brazil Liberty Seminar could not have been any better! 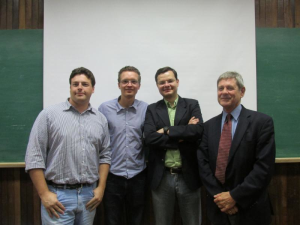