Only two years ago Mali was involved in civil war and August 2014 saw the first ever attempt to engage teachers and students there on the principles and foundations of free societies. Since then several summer schools have been run and these events use texts from the French edition of the CD ‘Ideas for a Free Society’ because there are so few books in Mali even in universities.

Book clubs ” Vivre Ensemble” “life together” ” العيش معا ” were launched in Mali in February 2015 at Gounzoureye commune in Gao to promote tolerance and peace through education. The Pat-Mali team is bringing 39 professors from different villages to work, interact and build their capacity to launch book clubs in their Madrassas and Schools.

This photo is of students with the certificates they received for completing one of the courses. 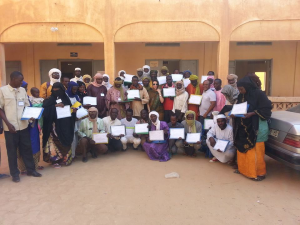 The Book Clubs will use e-readers preloaded with many books including some from the French CD.

Students hard at work at one of the Summer Schools the Arab Center ran in Mali in 2014. 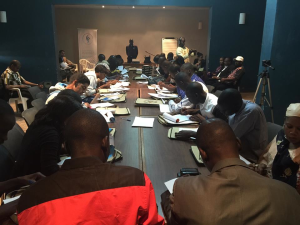