In Bosnia Herzogovina Multi ran an ‘Ideas Competition’ for students in November and December 2014.  The purpose of the competition was to support student activism and encourage them to develop innovative ideas to solve economic and social problems.

Teams of three students prepared a case for a solution of a particular problem which was predefined by the organizers and the first part of the competition involved presentations by the teams. The second half of the competition is reserved for questions by the audience or the moderators. The aim of this is to get clear debate and to challenge participants to continue their research. 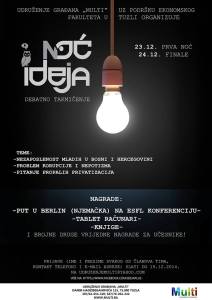 Then there is a vote by all who are present and the winning team goes to the Students for Liberty meeting in Berlin in March 2015.  Other teams gets books and other prizes.

This was an extremely unique event for the area of Bosnia and Herzegovina and the region as it was the first time there had been a debating competition on liberal issue. It was run in universities in two different towns and more than 400 young people were present (200 each night), with 16 teams.

Debate teams on these topics provided a number of interesting responses which referred to the liberalization of markets, questioning the role and participation of the state in the economy, then solving some crucial legal and constitutional issues, to legalization issues (eg marijuana legalization).The winning team has offered a comprehensive plan in the spirit of Ricardian model of comparative advantage, with clear identification and resolution of some basic economic questions in the Tuzla Canton and beyond. 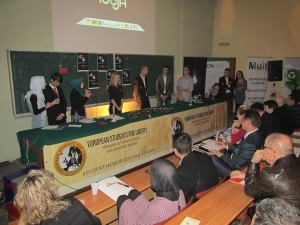 This year’s winner are the team from the Faculty of Economics in Tuzla, composed by Haris Hadžialić, Ammar Mesic and Miroslav Vovna.