In an effort to produce a group of open-minded individuals who can advance classical liberal ideas in Malaysia and thereby expand the network IDEAs ran a 5 module course on alternate Saturdays targeting 30 students and young professionals.  They were delighted to have 90 applications for 30 places which made them realise the scope for many more of these programs. 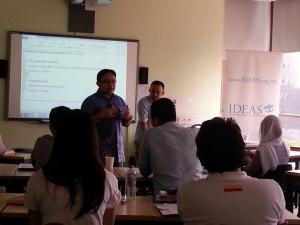 Owing to the growth in the interest among students to explore liberal ideas, the Institute for Democracy and Economic Affairs (IDEAS) believe that the time is ripe to develop series of classes on liberalism complete with proper reading materials, assessment and at the end the issuance of a certificate those who completed the course.

The ultimate aim for this course is to produce a group open-minded, classical liberal-leaning individuals that can aid in advancing classical liberal ideas in Malaysia. There is also the indirect benefit of expanding our network and creating new friends and allies that could assist IDEAS in our future plans.

We hope that these classes will lead to a creation of a new generation of liberals who will continue the fight for liberty in Malaysia. At the very least, this will go a long way in encouraging open discourse on the topic of freedom.

We aim to begin the programme in September 2014 onwards as Malaysian university students will return to their respective institutions of higher learning. While students may have more free time during the semester break in July-August, most of them will be back in their hometown with the exception of those who are natives of Kuala Lumpur. In choosing September, we hope to give those from out of Kuala Lumpur a chance to participate.

The course will be divided in to several modules. Each module will be taught over 1-2 sessions, with each session lasting around 1.5 hours. We have two options for delivery:

Option 1: The sessions will be conducted over an interval of 2-3 weeks apart, very likely on weekends or evenings. In total, the course will take about 5-7 months.

Option 2: We will run a full day class on Saturdays, covering a whole module.  This will allow the full course to be delivered over a shorter period.

The actual delivery method will be decided based on availability of teachers and venue.

We target to award 15-20 students and young professionals with a certificate of successful completion.  To get this number, we will open our classes to as many students as possible.  Only those who complete all classes and pass the exam will receive a certificate.

Module One: Introduction to Politics

Participants will be assessed twice, first halfway through the course and second at the end of the course. This will be a combination of courseworks and sit-down exam. A Certificate will be awarded to those who passed the assessments.