Network for a Free Societies partner in Morocco, the Arab Center for Scientific Research and Humane Studies, organised a ‘caravan of liberty’ to Egypt and the Yemen, June 2014.

With the partnership of the Center for Studies and Economic Media, in Yemen they organized a seminar entitled: “The impact of economic challenges to the democratic transition after the Arab Spring”. It was managed by the head of the Center Studies Dr. Mustafa Nasra. Next they had a meeting with Tawakkol Kerman who won the Nobel Peace Prize in 2011,  and the members of her organization to give them advice about how to /and what to write in the draft of new Yemeni constitution.

The following meeting in Yemen was titled Realizing freedom in the Yemeni Way where Dr Nouh El Harmouzi: took part in two panel discussion with Yemeni Youths for Change about: Freedom, Liberal democracy, constitutionalism, property rights, etc. This was filmed by Al Jazeera

They ran another seminar in partnership with the Foundation for Culture and Development in Yemen which is a new think tank in Yemen, two of whose founders were trained in the Arab Centers summer schools and think Tank Incubator Program.   It was entitled “Civil and Political Transition in Yemen after a National Dialogue” and was held in Sana’a the capital of Yemen”

This event saw the participation of academics, ministers and the media and it was covered by 7 television channels including Al Jazeera channel live which covered the entire event. 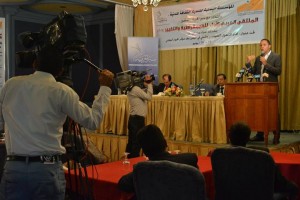 In Egypt they ran a seminar in partnership with the Arab Institute of Research and Studies ( The Think Tank of the League of Arab States) entitled “Arab Spring, Assessment of Three Years of Uprising” in 24 and 25 June, 2014.

They also held a meeting with Mahmoud Farouk the Executive Director of the Egyptian Center for public Policy Studies (ECPPS) which is the unique free market think Tank in Egypt.

Also in Egypt they held a conference and discussion with the leaders of Liberal Egyptian Party on “liberalism and prospects in Egypt”.  (The parliamentary  election are coming and there were very important questions about the classical liberal political program)