Larry Reed, President of FEE, giving the award to Linda Whetstone, Chairman of Network for a Free Society. 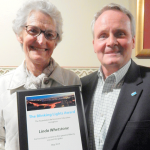 The Blinking Lights Project is a new effort at the Foundation for Economic Education (FEE) designed to highlight and emphasize the vital link between personal character and a free society.

It “… stems from an experience Lawrence Reed had back in 1986, when he took a trip behind the Iron Curtain to visit freedom-fighters in communist-run Poland.

There he met with Zbigniew and Sofia Romaszewski, two brave dissidents who had just been released from prison because of their work to spread the word of liberty.

They had run an underground radio station that communicated the truths that the state-controlled media wouldn’t let their people hear.  They could only broadcast eight to ten minutes at a time before moving their location to stay ahead of the police.

Lawrence asked them “how did you know people were listening?”  So they told him something he’ll never forget:

“One night we asked people to blink their lights if they believed in freedom for Poland.  We went to the window, and for hours, all of Warsaw was blinking.”

Those blinking lights were a harbinger of freedom to come for Poland, as just three years later the Iron Curtain fell and Eastern Europe was freed from communist oppression”