This year ALT has decided the topic of ALT’s 2013 Student Essay Contest as “How can Poverty be Diminished? How is Wealth Created?”

Students are asked in the announcements to refer to the Values of Free Society CDs or its web site www.ozgurtoplumundegerleri.com and the articles under specific sections.

Students are asked to limit their papers to 2000 words and submit by April 15.

The Essay Contest are announced via ALT’s web site www.liberal.org.tr , email groups with subscribed around 1500 people, and leaflets are sent out to faculties all around Turkey via regular mail with special request letter to the administrations to announce as done each year.

The winning essays selected by the three members of the jury are announced during the Annual Freedom Dinner of ALT on May 11, 2013 in Istanbul. This year’s Freedom Dinner precedes the Free Market Road Show Conference on the same day to be held in cooperation with Austrian Economics Center, and Friedrich Naumann Foundation contributed by Liberty Fund, and Global Philanthropic Trust. The first 10 placements also receive travel scholarships to Istanbul and registration fees to the Dinner and Conference.

ALT has been organizing the Student Essay Contest every year since 2005 more or less under the above rules and conditions.

ALT’s Freedom Dinner is held every year since 2002. The Dinner brings together intellectual entrepreneurs, academicians, journalists, businessmen, opinion leaders, along with students, young people in the movement. ALT’s yearlong activities are shared with the participants. The winners of essay contest are announced that night. Guest speakers take the floor for keynotes. Finally the Freedom Award Ceremony takes place followed by the speech of the prize recipient. It is very influential and inspirational for young people to be among senior defenders of freedom from different backgrounds and professions. For this ALT tries to bring as much intellectually talented, hardworking and liberal minded students as possible and when funding is needed, ALT tries to find scholarship for the deserving ones.

3.    Schools for Graduate Students (two of them)

Regarding ALT’s investment in various fields and levels, it has come to a crucial need to conduct expertise or advanced programs for graduate students. In other words, having them introduced to ideas, some intellectually talented and interested students need further mentoring on classical liberal themes. This year ALT launched these programs and received many applications. Each school is intended to accept 8-10 students for 2 hour sessions to be held in 8 weeks moderated by a senior academic fellow. Students will be given readings beforehand for the moderated discussions. For those who fully followed the sessions will be given cash stipend and a set of books.

Reporting on the Project

The 2013 Essay Contest on “How can Poverty be diminished? How is Wealth Created?” was announced through ALT’s networks, social media groups in January 2013. Later, announcements were mailed to 145 Faculties in different 59 cities all around Turkey.

The winning essays were announced during the Annual Freedom Dinner of ALT on May 11, 2013 in Istanbul. The winners are as below:

– First Prize goes to Ms. Turku Yurtsever, a student at Dokuz Eylul University in Izmir city at Labour Economy and Industrial Relations Department for her article titled “the Antidote of Poverty in a Free Society: Market Economy”

– Second Prize: Ms. Esra Arslan, at International Relations Department of Istanbul University for “How to Advance Prosperity in a Free Society” 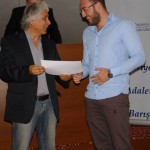 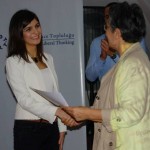 On the left ALT’s donor Mrs. Fatma Avci is delivering her award to Ms. Esra Arslan. On the right Burak Durgut receives his award from Prof. Dr. Ihsan Dagi.

The Freedom Dinner was held at Legacy Ottoman Hotel in Istanbul on May 11 after the Free Market Road Show Conference. There were 120 people in the Freedom Dinner hosting distinguished academicians, journalists and businessmen as friends of liberty. On the same day lawyer and columnist Orhan Kemal Cengiz was awarded the Freedom Honorary Award. He received his prize from a prior recipient Prof. Ergun Özbudun after Journalist Mustafa Akyol’s keynote speech. The ceremony was also covered by the media.

Below list of students received scholarships for Freedom Dinner:

Thanks to the generous grants provided by Global Philanthropic Trust (GPT) and Network for a Free Society (NFS), in this 2013 Spring, ALT has been able to launch two Graduate Student Seminars concurrently.

We have announced the programs concurrently as in this flyer . The announcement was made via the email groups and ALT’s social network as well as the flyers were mailed out to the faculties of economics, politics and law around 7-8 Ankara universities.

The programs were conducted in 8 weeks of 2 hour sessions.

10 graduate students were accepted out of the 16 applications to each. Students were distributed a reading list piled in a volume.

One of the Graduate Student Seminar programs was on “David Hume’s Political and Moral Philosophy” supervised by Asst. Prof. Dr. Melih Yurusen who has a PhD in philosophy on Hume (first in Turkish which is comprehensive and written from a classical liberal perspective) and a senior fellow at ALT. This program was conducted via the grant delivered by Network for a Free Society.

The other program covered by GPT grant was titled “Hayekian Approach to Social Sciences: Complexity and the Knowledge Problem” and moderated by Assoc. Prof. Dr. Fuat Oguz dealing with the problems of regulation and deepening his interests in Hayekian understanding.

Both programs were carried out with similar conditions.

In the announcements, it was mentioned that this program will offer understanding of the distinctive peculiarity in Hume’s philosophy which heavily influenced theories of knowledge, ethics and science in a historical context. Among the rich content of the program participants would find Scottish enlightenment, knowledge theory, passions, virtue, justice, rationalism, functions of commerce, and relations between liberty, authority and security.  The other program offered further understanding of the social world as a whole, beyond social engineering, instead with the ideas of Hayek and Austrian School via the discussions on the complexity theories and the knowledge problem. Moreover the seminars aimed to contribute to the participant’s economic and social perspectives based on competition and rule of law.

Please see the titles of the reading list here.

The reading list covered mostly pieces from Melih Yurusen’s PhD thesis prepared mainly from the Online Library of Liberty of Liberty Fund, some Turkish translations, and prints made by Liberte Publications of ALT.

This seminar was scheduled for every Saturday between 11.00 am – 13.00 pm starting from March 23 ending on May 18. Please see the picture from the very first session below. 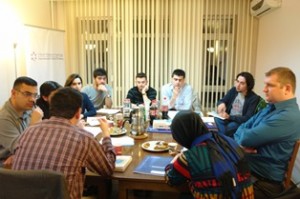 The students have been very eager to hear and read these ideas, participate in the discussions and further their graduate studies through classical liberal perspectives. The tutors have performed very well in introducing the topics, carrying out the ideas for debates and urging students for analytical thinking.  As ALT’s executive team, we have been very satisfied and pleased in launching these programs and motivated to continue in the coming years as they have already proven the need and intellectually fruitful outcomes. These programs also strengthened ALT’s educational function. Moreover, these seminars provided an opportunity for us to identify intellectually talented students as well as to follow up their interests. We have promoted one of the participants attend one IHS and one FEE seminar in US this summer and recommended to receive travel scholarship from Richard Seth Staley Foundation. And we have also recommended two other students to International Summer University of NES Georgia and two others to European seminars on liberty.

ALT intends to invite individuals from local organizations, media, academia, business to discuss democratization and liberalism in Turkey relating the actual problems such as new constitution, decentralization, violations of freedom regarding Kurdish, and Alevite people, freedom of expression, religious freedom, and entrepreneurship. For this we planned to organize one workshop in Diyarbakir city, a south eastern metropolitan with mostly Kurdish inhabitants in the first weekend of October. This would be very timely after the peace process to discuss the institutions of a free society. Following two programs will be held in December in an Eagean city and in a southern Mediterranean city. We plan to cooperate with a local partner among ALT’s network to well define local opinion leaders who are constructive and open to ideas of freedom. Programs will be held in 2-3 roundtable sessions.