Our partners in Morocco are the Arabic Center for Scientific Research and Humane Studies that was launched in 2012 .  The CEO is Dr Nouh El Harmouzi who also heads up Minbar al Hurriya the Atlas Economic Research Foundations web based Arabic program.  They have many educational projects with meetings for students held in a number of Arab countries and seminars and conferences for intellectuals.  They also co-operate with and help like minded people in other Arabic speaking countries

Another important activity is to translate books that explore and explain the principles and practice of a free society into Arabic and distribute them through websites and hard copy publications.  NFS has been involved in many of these translations that have been carried out by Ali Al-Haris from Iraq and also by Kalimat Arabia, a publishing house, who are now publishing some of the texts they translated.

Until this program was started virtually no classical liberal texts were available in Arabic and even the concepts of a free society were little known in the region.  NFS has suggested texts for translation, often those on the CD in English, and has funded their translation.  Also the purchase of substantial numbers of the books once they are published so they can be widely available to the students who attend their events.

At the end of 2013 it is hoped that a CD will be produced in Arabic to include all the texts that have been translated. 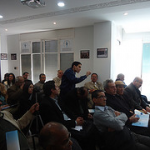