A selected group of professors, journalists and public intellectuals met at the Catholic University of Portugal in February 2011, to attend the launch of the DVD “Ideias de Liberdade / Livres para Escolher” in Portuguese in Lisbon.

In order to reach these ‘second hand dealers in ideas’, two well known speakers were invited to the event: João Pereira Coutinho, one of the most read and influential columnists of the Portuguese press, and Rodrigo Adão da Fonseca, a prominent television commentator and financial expert, currently working on a project to open a new private bank in Portugal. 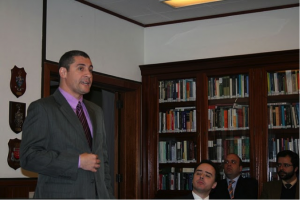 Bruno Garschagen, Manager of Institutional Relations of OrdemLivre.org, explained OrdemLivre’s work in the Portuguese-speaking countries, and provided an overview of their activities, pointing out opportunities and threats to liberalism in the Lusophone world. He presented the content of the DVD “Ideias de Liberdade / Livres para Escolher” to the audience and explained the goals of this project.

Rodrigo Adão da Fonseca spoke about Milton Friedman’s legacy and his great importance to spreading the ideas of liberty around the world. Dr. João Pereira Coutinho warned the audience about the dangers of defending liberty in an abstract sense without taking into consideration that human choices are not always conducive toward happiness. Coutinho stated that there is always the danger of the word being used to implement and justify dictatorial regimes on behalf of the collective good that ensure the freedoms of everyone and, at the same time, violates individual liberties. 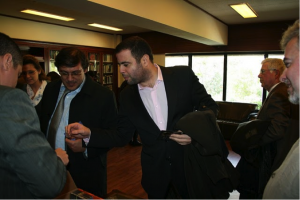 Bruno Garschagen said that many people mailed him after the event asking for CDs and information about it.