Language of Liberty held their first event in Brazil in April 2012.

Marcel van Hatten, who is Brazilian, but currently studying in the Netherlands, worked with Glenn Cripe and Andy Eyschen of Language of Liberty to make it happen.

Marcel said “  We thought a big barrier would be finding even 40 participants interested in spending 3 days at a seminar conducted in English, since the majority of Brazilians don’t speak it. However, Porto Alegre has 1.5 million inhabitants, with many students, so we decided it would be a good place to experiment.

Our main concern turned into our best virtue. Even though many participants had little previous exposure to libertarian (liberais, in Brazil) ideas, it was the idea of English immersion that attracted most of them. This interest in the English language opened many eyes to views of the world they had never seen before. Over 100 people attended! “

They had an ambitious program and Glen Cripe introduced and explained the CD. 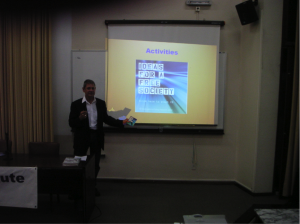