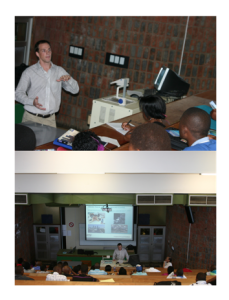 Ideas for a Free Society CD to a group of lecturers and students from the economics department of the University of Zululand on 17 May 2011.

Prof Shrestha and the other participants showed a keen interest in the CD and he was pleased that the FMF made the effort to come and introduce some of the concepts contained within it to his fellow staff members and students. The presentation by Jasson Urbach was well received as evidenced by the number of questions posed in the Q&A session after the presentation.

45 CD’s were distributed to the students and Professor Shrestha took an additional 10 CD’s for the faculty’s library and absent students. Prof. Shrestha wanted to keep contact with the FMF, despite his intention to emigrate to Thailand in the near future.

In planning his part of the project Temba Nolutshungu had started an initiative that has possibilities for enduring growth. He coupled the CD project with the establishment of “Liberty Societies” at all three the Western Cape universities for which he is responsible. He has linked up with four very enthusiastic and active university graduates who will be the driving forces in the respective societies. The idea is to have independent initiatives at the three universities and to bring their members together on occasion for joint initiatives to promote liberal ideas. They are using the distribution of the CD’s as a central part of the establishment of their societies and their programs.

Presented by Mr Temba Nolutshungu – Director: Free Market Foundation at Friday Seminar of the Department of Political Science, University of Stellenbosch on 8 April 2011.

Temba Nolutshungu is a Director of the Free Market Foundation and is currently Chairman of the Langa Heritage Foundation and trustee of the Helen Suzman Foundation. During apartheid he was deeply involved as a black consciousness pioneer and was detained in solitary confinement on two occasions. Subsequent to the transition to democracy in South Africa, Mr Nolutshungu has dedicated his efforts to the enhancement of individual liberties for all, and is specifically focused upon the role of the free market economy, limited government intervention and the defence and promotion of individual freedoms. Mr. Nolutshungu is energetic, outspoken and forthright, and tenders no apology for the manner in which his candid opinion is delivered, simply that it is his opinion and that those gathered to listen are entitled to dispense their own in what he terms a “Liberated Zone” of discussion.

Thereafter he drew attention to the CDs titled Ideas for a Free Society mentioning that it contained texts by various scholars that focussed on economic and social freedoms with much emphasis on individual liberties as the general theme.  He urged those present to study the essays and to share the CDs with others.   Copies (30) were distributed to all those present.

In his discussion he is frank with regards to the South African government’s handling of labour laws and employment legislation which hinders the private sector in its pursuit to better its own condition and in doing so provide jobs to those best qualified to bring benefit and profit to the business enterprise, irrespective of race, colour or creed. His assessment of employment equity policies and economic empowerment legislation is critical, motivated by the sentiment that they are implemented in such a way that creates further divisions within South African society, legislation which is purported to benefit those associated or connected intimately with the entrenched political elites, while those who are disadvantaged who need it most are left by the wayside.

He stresses the importance of the pursuit of individual freedoms, and is positive about the extent to which individuals who are equipped with only basic literacy and numeracy skills are able to conduct commercial transactions and drive for profit in the informal economy. To this, and in response to a question, he encourages an education voucher system for the impoverished, as well as an opportunity for the economically disadvantaged, irrespective of colour, to be given a stake in parastatal industries such as South African Airways, the rail and port corporations SPOORNET and PORTNET as well as the power and telecoms utilities ESCOM and TELKOM so as to share in their wealth, hold them accountable and create a competitive commercial environment for such state run enterprises.

Rooted in the title of his talk during the seminar, the portion “in every aspect the private sector delivers” is a substantial driver of Mr. Nolutshungu’s discussion. The jobs created and sustained in the private sector and the salaries and subsequent revenue generated for the state (in the form of income taxes and other levies) serve as the power with which the government delivers its services and carries out the offices of the executive, legislature and judiciary. His estimation is that the private sector delivers the resources that the public sector converts to service delivery. How government legislation hampers this and what can be done to remedy such debilitating issues drives Mr. Nolutshungu to create lively constructive dialogue on the issue, such as was experienced in the Seminar through student’s questions raised concerning issues of employment equity, representation in education, and the State’s management of the ‘Invisible Hand’ in the formal market.

The Seminar was attended by 27 undergraduate and postgraduate students, and was facilitated by Conrad Kassier and Jacques de Vries. On behalf of the Department of Political Science of the University Stellenbosch, Friday seminar co-ordinator and lecturer Ms. Derica Lambrechts would like to thank Temba Nolutshungu for his visit, for the sincere manner in which discussions were taken on and for engagement with students on relevant and often sensitive contemporary issues in South Africa’s Democracy.

2.       Objective:  distribution of CDs and related discussions of contents to act as a catalyst for ongoing discussions on liberty

3.       Project: the establishment of Liberty Societies at the three universities.  To be formally launched by the 30th September

3.1   The CDs to be handed over then.  The four conveners of the societies have studied their copies and

3.2   Temba Nolutshungu will be presenting to audiences at seminars to be organised at the three universities