Armenian Youth for Liberty, Language of Liberty and Network for a Free Society joined together to support the first Liberty Camp in Armenia.

The second Liberty English Camp in Armenia, organized by Armenian Youth For Liberty in cooperation with Language of Liberty Institute took place on 2-8 April 2012, in Tsakhkadzor. The event, supported by Network for a Free Society, brought together 28 liberty-minded people, the instructors from Malaysia Andy Eyschen, from Georgia David Khosroshvili , and from the USA Glenn Cripe among them. 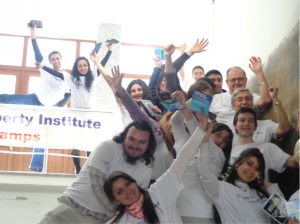 Two students joined the camp from the remote regions (Marzes) of Armenia. Naira Siravyan from Nerkin Kndzoresk village (Syunik Marz) has never before studied in such an international environment. The village she is located in is a refugee village with over 50% of the population under the poverty line. Naira was happy to learn about the importance of private actions to solve the poverty issues.

All the students appreciated the opportunity to learn about the classical liberal ideas trough interactive lectures, debates, and discussions. Such topics as The Proper Role of Government, The Morality of Capitalism, and Entrepreneurship were the most popular ones. Inspired with these ideas the participants continued debating and discussing during their free time. It was exciting to hear a strong message of hope from the students many of whom feel ready to employ the knowledge gained for the betterment of their countries. There was a great interest among many students in becoming entrepreneurs. Although it was upsetting to hear that students feel discouraged by the current practices of cronyism. They claim that it is still necessary to favor Armenian and Georgian states to run businesses successfully.

Throughout the week, the participants divided into 6 groups were preparing for the Human Rights Workshop. Each group had to discuss the importance of the human right they have chosen and suggest the private actions aimed at minimizing its violations. The winners presented the right to Internet access, stressing its importance for the enjoyment of freedom of information. Their slogan was “If your government wants to shut down the Internet, shut down the government!” Ani Yengibaryan and Nvard Sununu insisted that governments restricting the access to internet violate human rights. At the same time, they opposed to the idea of free internet, mentioning that human rights, in particular, economic and social rights do not impose a corresponding duty of fulfillment on governments. 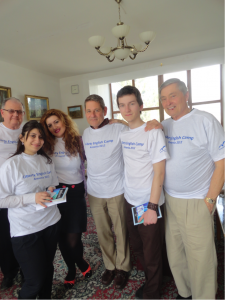 “Everything was great; the seminars were very interesting and useful – it’s a way for new life!”Tatevik Muradyan

“I had an unforgettable week – have learned lots of new things, have practiced my English, and finally have met lots of new people! All of you I will never forget!”Lusine Chilingaryan