Quelimane, Mozambique was the venue for collaboration between MELIMO (Movement of Liberal Students) Language of Liberty and Network for a Free Society in January 2012.

Manuel Araujo, the newly elected mayor, Henriques Viola, Glenn Cripe and Andy Eyschen attracted larger audiences than they had expected.  30 were expected the first day but 50 turned up, 70 on the second day and over 110 on the third day with standing room only.

Manuel’s recent election as mayor had the city’s attention and excitement and expectations focused squarely on him, and he was eager to explain to them the philosophy and purpose behind his proposals to improve the opportunities for the people of Quelimane.

Language of Liberty stayed an extra day and presented a highly condensed version of the program to another audience of about 20, mostly Manuel’s staff.

English and Portuguese CDs/DVDs were give to all participants as needed and two sections of Free to Choose were shown.  Glenn and Andy described the contents of the CD with emphasis of works discussed during the camp such as Bastiat’s The Law, What is Seen and what is not Seen etc and they gave away about 70 copies of the “Morality of Capitalism” 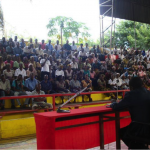 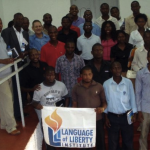 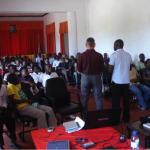