Network for a Free Society played an advisory role in running this meeting and also arranged funding and fellowships for about 30 of the participants who came from some 10 countries in the region.

Report on the Mont Pelerin Society Meeting in Fez 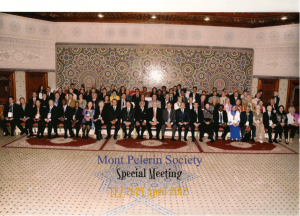 Participants generally stayed in three hotels that were very close to the conference venue.

The meeting got off to a wonderful start.  The welcome ceremony was held in the Big Hall of the Batha Prefecture in the Fez Medina (Old City of Fez) and everyone was privileged to hear Vaclav Klaus, President of the Czech Republic, speak on “How regimes collapse and how to go back to Liberty”.

As with all the sessions there was an excellent translation service from French to English and vice versa.

Dinner was a short walk away in a magnificent house, Maison El Mernissi, Salage, Batha, that had been the home of one of the great families of Fez.  We returned to this magnificent building for the closing dinner followed by entertainment and Moroccan dancing.

On Sunday Nobel Laureate Mario Vargas Llosa gave the main talk of the day on  “Tolerance as an Ethical Value of the Free Society.”

The focus of the sessions on Sunday was on the role of liberty in economic development and which political model would be favoured by the Arab world. Participants thus had the opportunity to get thoughtful information on the complex relations between individual liberty, the role of Islam and political regimes in Arab countries.

On Monday participants were able to mix, meet and discuss while enjoying a tour of the historic Old Medina with its narrow winding streets and myriad shops. Then onto the ruins of the city of Volubilis, founded in the 3rd century BC before becoming an important Roman outpost.  Partner tours were provided on the other two days.

On Tuesday the sessions focussed on social change, the role of institutions and education; the relations between religions (Islamic, Christian, Jewish and Asiatic religions), economic development and liberalism; or the role of economic freedom in the Arab spring. Most of the papers will be available to participants and members on www.montpelerin.org

One of the much appreciated features of the meeting was the fantastic lunch venues and each time carpets, canopies, tables, flowers and so much wonderful food had arrived ahead of us.  On the first day lunch took place beside the Weapon’s Museum with a spectacular view.  On the second it was beside Volubilis with another wonderful view up to the city and also down across the plain.  On the third day we were in the peaceful courtyard garden of the Batha Museum and the challenge was not to eat all the delicious food on offer.

Professor Pascal Salin and Professor Esserrhini Farissi were co-organisers of the conference which was run under the auspices of the Association Savoir et Développement whose members worked so hard throughout the meeting to ensure it was a big success.  It benefited from the very efficient support of  University Sidi Mohamed Ben Abdellah  of Fez. The administrator was Abdelhak Jebbar.

President Vaclav Klaus: “How regimes collapse and how to go back to liberty?”

Mario Vargas Llosa, Nobel Prize in Literature, “Tolerance as an ethical value of the free society”

SESSION 3: The Role of Liberty in Economic Development

SESSION 4: Which political model in the Arabic world?

5.1. The Birth of Capitalism in Islam   Benedikt Koehler,

SESSION 6: The Role of Institutions

6.1. One forgotten cause of the Arab spring: the lack of economic freedom , Emmanuel Martin, unmondelibre.org

7.1. The perspectives of freedom after the Arab spring , Shafeeq Ghabra

8.2. The state of education in Arab countries,  Saïd Hanchan, Director of the Moroccan National Evaluation Authority of Education Policies & CNRS-France & University of Mediterranean in Aix-en-Provence

Concluding remarks by Kenneth Minogue (at the end of session 8)