The Istanbul Network for Liberty held their first meeting in Fez – “Exploring the Principles and Values of a Free Society within a Muslim World”. Network for a Free Society was involved in the administration of the meeting and arranging fellowships where needed.

Report on the first meeting of the Istanbul Network for Liberty

Approximately 50 liberal (in the European sense) intellectuals were originally signed up  and they came from Algeria, Canada, Egypt, Germany, Kuwait, Luxembourg, Libya, Malaya, Morocco, Nigeria, Pakistan, Sweden, Syria, Tunisia, Turkey, the UK and the US. Unfortunately at the last minute some were unable to get visas for Morocco. 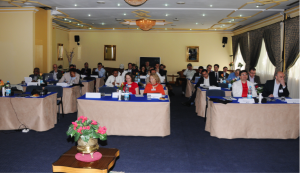 Everyone had come on from the Mont Pelerin Society meeting that was held in Fez from 21st to 24th April where the discussion had been “Freedom, Human Dignity and the Open Society’.   So they already knew each other and were ready for a thoughtful debate which was started off with a thought provoking welcome from Dr Azhar Aslam the Executive Director of the Istanbul Network.

“I welcome you to the first international conference being held under the auspices of infol… Istanbul network for liberty.

………development of Muslims intellectual thought, particularly  with reference to libertarian ideas of individual liberty and responsibility, limited government, free Market economy and rule of law, is my passion.”

8 sessions followed.  Important papers were presented by each of the main speakers who were followed by a commentator and then general discussion.

6 of the papers will be available on the Istanbul Network for Liberty website when it is launched shortly.

Dr Shafeeq Ghabra from Kuwait spoke about the Egyptian rebellion and Dr Ali Massoud from Egypt commented on his paper.

After the break Dr Khalil Ahmad from Pakistan talked about the rule of law and good governance in Islamic countries with Dr Hassan Basademir commenting and then Youcef Maouchi from Algeria who is currently working on his thesis in France gave us an insight into it with his paper on Islamic law and its effect on development.  Thomas Gur from Sweden was the commentator. 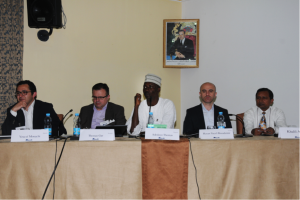 After lunch Dr Bilal Sambur presented a paper on “Islam, Freedom of Conscience, Worship and Expression” with Dr Detmar Doering Director of the Liberal Institute in Germany discussing it.

This was followed by a paper presented by Dr Maszlee Malik from the Islamic University of Malaysia on Islam and the “Provision of Welfare by Non-State Entities.”

The final session included a paper by Dr Hicham El Moussaoui of Morocco on “Islam and the Bridges to the Market Economy” followed by comments from Mohamad El Zaroug on the situation in Libya.  Mr Zaroug had been part of the transitional authority in Libya following the uprising.  Dr Benedikt Koehler commented on both papers and an animated debate followed.

Earlier discussions had been thoughtful if a little reserved but after this final session an animated debate took place in which everyone  took part with a good deal of passion.

“1. It was confirmed and established time and again by the presenters today that values of liberal order… Individual liberty, limited government, free Market economy and justice based on rule of law… Are well founded both in Islamic scriptures and  in Islamic history,

2. There is still an ongoing debate about when, how and why Muslims people lost their way and Muslim mind closed itself…. And that we need to study this to help us unravel the enigma of finding a solution to this morass

3. And finally that while we are debating the above, we must start working on expounding the principles of liberal order from within Islam…

9.30 am:         Some considerations on the condition of social, political and economic thinking in the Islamic world. Prof Atilla Yayla. Discussant: Dr Azhar Aslam.