Li Zhao Schoolland organized the first China Austrian Economics Camp (CAEC with Northeastern University (NEU) of Shenyang, China. Teaching about the economics and ethics of free markets were: Tom Palmer of the CATO Institute, Fred Foldvary of Santa Clara University, Cris Lingle of Francisco Marroquin University in Guatemala, Kenli Schoolland of the University of Buckingham in England, Zhu Haijiu of Zhejiang GongShang University in China, Dean Peng of Beijing, and Jeff Crawford & Ken Schoolland of Hawaii Pacific University. Four of these teachers are members of the Mont Pelerin Society, founded after World War II by F.A. Hayek to promote an intellectual resurgence of free market ideas.

Nearly a hundred students signed up for the camp, July 18-25. “This was a remarkable turnout,” said Li Schoolland, “considering that the students attended 8 hours of classes and discussions daily during the first week of their summer break! Only a few students missed any classes, and that was only because of conflicts with other summer programs.”

NEU provided facilities and accommodation for all students and faculty, Professor Jeff Crawford generously sponsored the travel expenses of most of the faculty, others were sponsored by the International Society for Individual Liberty (ISIL) and the CATO Institute. More than 300 economics books in English and Chinese were donated to the students from various sources: Jim Walsh of Silver Lake Publishing Co., Jim Peron of Laissez Faire Books, and Dick Rowland of the Grassroot Institute of Hawaii (GRIH). 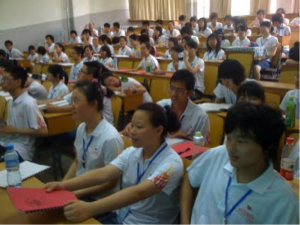 Mark Skousen, author of 20 books translated into Chinese, donated a boxed collection of his books. Each of the hundred students received signed copies of Professor Fred Foldvary’s book in English and of Ken Schoolland’s book in Chinese. And each student also received the CD “Ideas for a Free Society,” a collection of a hundred libertarian classics compiled and produced by Linda Whetstone and the International Policy Network.

From beginning to end, these enthusiastic and brilliant students were eager to practice their English and to engage with their teachers in American-style classes. China is experiencing a stunning market transformation and students are very open to the ideas of Hayek, Mises, and Friedman in contrast to the routine classroom fare of Marx and Keynes. Indeed, these Chinese students seemed to be much more intrigued with free market alternatives than many
American students who have taken markets for granted and are too willing to accept central planning.