The Lahore Chamber of Commerce and Industry, Shahrah-e-Aiwan-e-Tijarat, (Near China Chowk), Lahore

Despite the power riots and violent protests against the excessive electricity black-outs in the city of Lahore, 71 participants registered for the event. 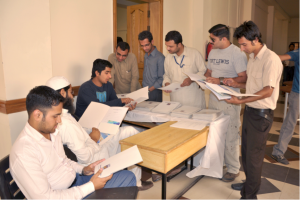 First, Dr. Khalill Ahmad, Executive Director of the Institute, welcomed the speakers and the audience.

He spoke of the difficulties of starting the Institute, and how times had changed since 2002 when he pleaded for the freedom of the citizen as a lone voice advocating privatization of education and everyone else wanted to eliminate “Rightist Indoctrination” from the text books. 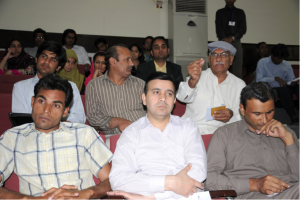 But with time, the government has begun to adopt free market rhetoric and although the present government is politically not free market there are free marketers in its economic team which has prepared, “Framework for Economic Growth 2011” a document pleading for free market reforms in the economy of Pakistan.

Dr. Khalil concluded that when the Institute was set up in 2003, there was no acceptability for the free market ideas and philosophy in Pakistan but now everybody is prepared to listen to free market solutions.

The key-note speaker, was Hammad Siddiqui, Deputy Country Director CIPE, Pakistan. With the help of short videos he explained the meaning of the free market and told his experience of working with chamber of commerce and industry people and with trade bodies. He pleaded for using common language and common themes to spread the free market philosophy to the ordinary businessmen. He said, Change your words, and Change your world. 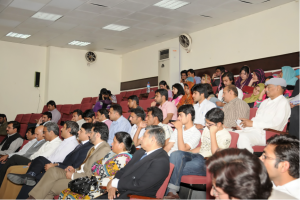 He also said that to spread the free market ideas, concepts of Right and Wrong, Ethical and Non-ethical be used.

He also dwelt at length on the role of the Institute in promoting the free market philosophy in Pakistan, and said that how a think tank can make difference is exemplified by this Institute.

Professor Najaf Yawar Khan, Director/Chairman Management Studies Department, G.C. University cited the present excessive electricity black outs and said that in Malaysia, they had IPPs (Independent Power Producers), and honored the contract made with them, and now there is no shortage of electricity in Malaysia, rather they have it in excess. He concluded that free market needs an efficient system of enforcement of contracts, and honoring of contracts, whereas the Pakistani government just backed out of the contracts made with the IPPs.

Dr. Raza Ullah from Peshawar spoke on the issue of terrorism and the case for free market economy. He said that the terrorists are the worst type of statists, because if they come to power, they will leave no room for freedom to be enjoyed by the people. He said that Taliban and free market are just two opposite poles and explained this is why free market philosophy and ideas of freedom have an especial appeal for the educated and freedom loving youth. 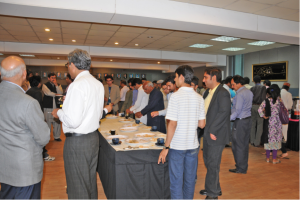 In the open session, participants shared comments and raised questions. Most of the questions, while accepting the free market solutions to economic problems and in the education sector, were replete with state’s role.

Everyone was given a copy of the Pakistan version of the CD ”Ideas for a Free Society” as they registered.