A CD Distribution Event “Ideas for a Free and Responsible Society” was organized by Alternate Solutions Institute at the University of Central Punjab. A total of 130 students from various departments and institutes of the University participated in the event. The students attended the event completely at their own will as there was no administrative compulsion on them to attend.

The volunteers of the Institute welcomed the participants and distributed file-folders containing a copy of the CD, Registration Form, World’s Smallest Quiz, Essay Competition announcement, amongst the students. 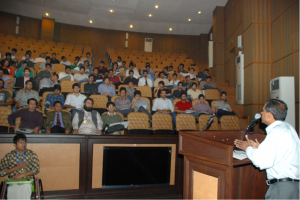 Mr. Ali Salman, Director Programs, highlighted some of the latest studies done by the Institute including A Study of the Education Voucher Scheme in Lahore. He also dwelled on the theme of the CD as a whole.

The students were then given a visual tour of the CD. Rare to find articles, important books, which the CD contained, all added to the interest of the students in the CD.

The students took part in “World’s Smallest Quiz” which had 5 Multiple Choice Questions related to the Libertarian philosophy.

The event concluded with a vote of thanks to the University of Central Punjab Management, Mr. Zaeem Yaqoob, Director, Promotion & Placements, and his team. In turn, a token of appreciation in the form of University Souvenirs were offered to Dr. Khalil Ahmad and Mr. Ali Salman.

The students were then given refreshments, where the entire A. S. Institute team engaged the students and took informal feedback and remarks for their future programs.