I left Lagos on the Feb.2, 2010 to for Abeokuta –Ogun State Nigeria. The students’ leaders and executives met me at my hotel (Kings Palace hotel) and we immediately went into a meeting that lasted almost four hours. After modification of time from 10.am to 1pm due to some logistics (Transportation, renting of projector among others), we concluded plans on the conduct of the seminar.

On the event day, students started arriving the hall from 11.25am. We started at exactly 1Pm with 133 students in attendance while representatives of the school authority watched. I took audience on the working of AfricanLiberty.org, introduced ATLAS, IPN, IMANI and other network. 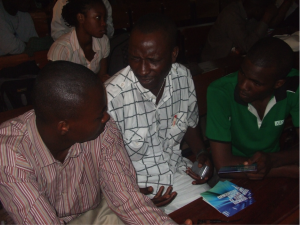 On the second step using the hired projector, I discussed the African Market History, touched on colonialism as the elite’s slogan for their failure, the beauty of liberalization as against regulation by government and the workings of capitalism.

The seminar was announced to be participatory hence, when a student asked how they could access materials through us for further knowledge on liberal issues.  I quickly use that to introduce the Ideas for a free society CD. Henry Hazlitt’s Economics in one Lesson with reference to Bastiat‘s What is seen and what is not seen was extensively used. Another question was how to continue sharing the thought with other students. I suggested the formation of the students’ liberal movement within the school with reference to that of Ahmadu Bello University in Zaria.

The only set back witnessed was when Electricity from the National grid was taken off during the event. It was an oversight on my part not to have hired a generating machine to be on standby. That will be taken care in subsequent events. Although the projector was in use in the beginning but exploring the Ideas for a free society, CD provided by IPN became impossible. That did not however affect the discussing bringing to light the content and usage.  The incident however gave a good opportunity to x-ray the ownership of businesses by government. In the little -dark hall with little ventilation, no sign of uncomfortable feeling was noticed in the students faces. When I ended my presentation after 3 hours, the shout of more… more… more … rented the air. Other association/department leaders in attendance besieged me after the event for further collaboration with their department and association 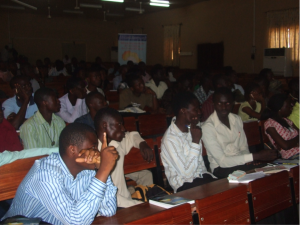 Unknowingly to me, 32 students has penciled down their names to form the students liberty Association and seek my guide towards the formation. This I again venture into under a tree in the school and left the school back to my hotel at 7.25 PM

The registrar at University of Agriculture Ogun State Nigeria posted on our facebook page Feb. 2010

“Fantastic! the whole package is fantastic. Ideas for a free society would truly help reshape and redirect our thoughts, our youths and the community for a better tomorrow.”